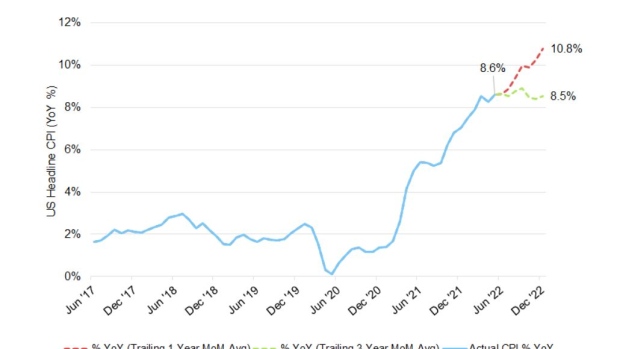 (Bloomberg) -- The Federal Reserve was in denial about inflation and moved too slowly in trying to quell rising prices. That’s now put it on a trajectory to create a recession, if it hasn’t already done so.

That’s according to Rob Arnott and Campbell Harvey at Research Affiliates, who said in a new paper that there’s no reason the economy needs to see a downturn. And yet, one may already be underway.

“The simple fact is recessions are usually created -- they don’t happen naturally,” Arnott said in an interview. “Economic expansions don’t die of old age -- they’re murdered by the Fed. And we’re seeing that happen again now.”

The crux of the matter is that the Fed ignored inflation for far too long. The central bank’s own forecasting record is rarely better than an Ouija board, the duo said, and being late to the game increases the chance that it overreacts. In addition, many of the root causes of inflation right now stem from supply-chain disruptions, which higher interest rates cannot fix. A hard landing, in their view, means the economy goes into a serious recession, like the one associated with the 2008 crisis.

It’s a tenuous time. Inflation is at a four-decade high and could -- averaging out the past 12 months and pulling the figure forward through year-end -- finish 2022 at 10.8%. Arnott and Harvey point out that “our current problems are self-inflicted by an extended period of negative real rates.”

Arnott is telling business owners to manage risk. “If you’re spending money that you don’t need to spend, you might give some serious thought to stopping it for a little while,” he said.

As for what he recommends equity and bond investors do, Arnott said they should buy when fear is at its highest point.

“We’re probably not at peak fear, the bear market probably isn’t over, but you could do worse than starting to average back in if you were smart enough to lighten up before this,” he said. “If you were already fully committed, then I’d say hold off. Don’t top up unless you were already risk off.”

The bond market, on the other hand, is not priced to reflect a possibility that inflation could finish the year at 8.6% or 10.8% -- instead, it’s assuming that price increases are transitory and headed lower in the months ahead.

“You’re not at peak fear on the bond market,” Arnott said.