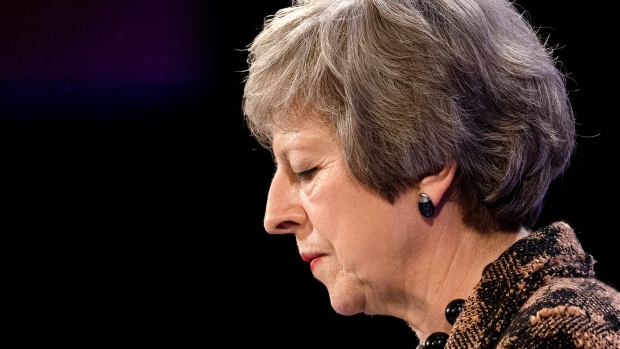 British Prime Minister Theresa May speaks during the 2018 CBI Conference on November 19, 2018 in London, England. Theresa May defended her draft Brexit agreement before the audience of business leaders, asserting that the deal will restore UK control over its money, laws, and borders , Photo by Leon Neal/Getty Images

LONDON -- A timeline of key events in how Brexit unfolded and how the political crisis led up to Theresa May's ouster as British prime minister:

May 7, 2015: British voters elect a majority Conservative government. Then-Prime Minister David Cameron confirms in his victory speech that there will be an "in/out" referendum on Britain's EU membership.

Feb. 20, 2016: Cameron confirms that he will campaign for Britain to remain in the 28-nation bloc. The referendum date is set for June.

Oct. 2, 2016: May says that Britain will begin the formal process of leaving the EU by the end of March 2017. In order to do this, the British government would have to invoke Article 50 of the EU's Lisbon Treaty.

June 8, 2017: A general election called by May to bolster her party's numbers in Parliament to help with the Brexit negotiations backfires as her Conservative Party loses its majority and continues in a weakened state as a minority government.

July 7, 2018: May and her Cabinet endorse the so-called Chequers Plan worked out at a fractious session at the prime minister's country retreat. It leads to the resignations of Brexit Secretary David Davis, Foreign Secretary Boris Johnson and others who favour a more complete break with the EU.

November 25, 2018: EU leaders approve a withdrawal deal reached with Britain after months of difficult negotiations. May urges British Parliament to do the same.

December 10, 2018: May delays the planned Brexit vote in Parliament one day before it is to be held because it faces certain defeat. She seeks further concessions from the EU.

December 12, 2018: Conservative lawmakers who back a clean break from the EU trigger a no-confidence vote in May over her handling of Brexit. She wins by 200 votes to 117, making her safe from another such challenge for a year.

March 23, 2019: Anti-Brexit protesters flood a central London by the hundreds of thousands demanding a new referendum on whether to leave the EU.

March 28, 2019: May offers up her job in exchange for her Brexit deal, telling colleagues she would quit within weeks if the agreement was passed.

April 11, 2019: Britain and the EU agree to extend the Brexit deadline to Halloween. The Oct. 31 cutoff date averts a precipitous Brexit on April 12.

May 7, 2019: The UK government acknowledges for the first time that the country will definitely take part in the European Parliament elections because there's no chance that a Brexit deal can be approved in time to avoid them.

May 17, 2019: Talks between Britain's Conservative government and the opposition Labour Party seeking a compromise over Brexit break down without agreement plunging the country back into a morass of Brexit uncertainty.

May 21, 2019: May offers a concession to lawmakers, giving them the chance to vote on whether to hold a new referendum on the country's membership in the EU -- but only if they back her thrice-rejected Brexit agreement.

May 24, 2019: May says she will step down as Conservative Party leader on June 7 and will serve as caretaker prime minister until her successor is chosen.

June 7, 2019: May due to formally step down as Conservative Party leader.