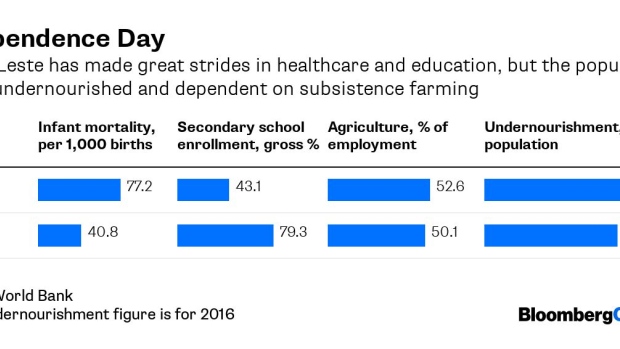 Thousands of local Timorese celebrate the anniversary of Independance Day on May 20, 2016 in Balibo, Timor-Leste. Today marked the 14th anniversary of the young nation's formal independance from Indonesia attained in 2002 after a 24 year occupation. , Photographer: James D. Morgan/Getty Images AsiaPac

(Bloomberg Opinion) -- Given a sad history of exploitation by foreigners, the young democracy of Timor-Leste can hardly be blamed for being hell-bent on self-sufficiency. But its current drive to cement its independence risks squandering the faltering progress the country has made. If the government doesn’t tread carefully, a future of debt peonage to China beckons.

Friday marks the 20th anniversary of the final dark episode in Timor-Leste’s 24-year occupation by Indonesia, which killed about 100,000 Timorese and came after centuries of colonial neglect by Portugal. On Aug. 30, 1999, a referendum delivered an overwhelming majority in favor of independence for the half-island also known as East Timor, but unleashed a wave of retaliation from Indonesian forces and militias that left more than 1,400 dead and destroyed public infrastructure.

Australia, the most forthright defender of Timor-Leste in that period, turned around to betray its new neighbor five years later. During negotiations over how to divide the oil and gas reserves along the undersea boundary between the two nations, Canberra used the cover of a foreign aid project to install listening devices in the office of Timor-Leste’s prime minister and eavesdropped on negotiating tactics, thus winning a larger share of resources for itself.

Timor-Leste has nonetheless managed to pick itself up. Gross domestic product per capita more than tripled in the first decade after formal independence in 2002, before slumping with oil prices in the years since. Infant mortality rates have been cut nearly in half, while secondary school enrollment has roughly doubled.

More to the point, the nation’s mineral wealth has been managed with more foresight than is normally the case with poor, newly independent states.

The country’s Petroleum Fund has assets of around $15.8 billion, equivalent to more than eight years’ worth of non-petroleum GDP. Relative to the size of the economy, that’s larger than the sovereign wealth funds of Saudi Arabia, Kuwait or Norway. Drawing on fund surpluses to finance budget deficits has left Timor-Leste with minimal levels of public debt. In terms of corruption, the country scores around the same levels as Brazil, Thailand and Colombia, and ahead of Vietnam – not a terrible result, given the circumstances.

It’s not all so positive. Half of employment is in agriculture, mostly at subsistence levels, and the country struggles to feed itself. Levels of undernourishment have declined only slightly and remain among the world’s highest.

Worse lies ahead. The Bayu-Undan offshore gasfield which has provided Timor-Leste’s petroleum wealth for the past few decades will run out by 2023. The Petroleum Fund will be exhausted a few years later, according to one 2014 study. Further revenues will depend on developing the nearby Greater Sunrise field – and there the problems of self-sufficiency become most apparent.

Bayu-Undan’s gas was brought ashore in the Australian city of Darwin, but Timor-Leste’s government is determined that Greater Sunrise product will be processed at home as the heart of a major new industrial zone, known as Tasi Mane.

For all the powerful nation-building symbolism and potential revenue from such a plant, Tasi Mane may never be viable – especially given the collapse in gas prices and extreme difficulty around the world in financing major new projects. Building a whole new facility on Timor-Leste’s coast will cost around $12 billion, according to a 2016 report, even making the dubious assumption that it’s physically possible to build a pipeline through the seismically unstable Timor Trough to get there. A far better option would be to hook into the ready-made export terminal in Darwin or use a floating LNG plant instead – but those have been ruled out by Timor-Leste’s government.

“The Timorese leadership has thrown all their economic eggs in this one basket because it has limited other options,” said Bec Strating, an expert on the country at Melbourne’s La Trobe University, “but I’ve never met an oil or gas expert who thinks this is a workable project.”

The original commercial partners in Greater Sunrise are voting with their feet. Timor-Leste spent $650 million over the past year buying ConocoPhillips and Royal Dutch Shell Plc out of the venture, leaving only Woodside Petroleum Ltd. and Osaka Gas Co. The former has been adamant it won’t put significant amounts into developing Tasi Mane.

With commercial finance steering clear, the most likely option increasingly looks like China’s Belt and Road Initiative. National oil company Timor Gap earlier this year signed a $943 million construction contract with a unit of state-owned China Railway Construction Corp. Countries in the region “go where they can to obtain either grants or soft loans,” former Timorese President Jose Ramos-Horta said in an interview with SBS News last year. “And that, today, is China.”

Such a prospect risks a tragic waste of Timor-Leste’s potential. The Belt and Road is already notorious for building costly bridges to nowhere that leave governments with little to show beyond hefty interest bills. China’s growing presence in the Indo-Pacific via the Belt and Road has raised concerns that military and strategic aims, rather than purely commercial logic, underlie many of the projects. A $500 million highway built for Tasi Mane by a Chinese consortium in recent years and a $120 million airport are looking like white elephants.

It’s understandable that this young country feels betrayed by its neighbors. Entering a new abusive relationship with Beijing isn’t likely to be the right way to secure its future.