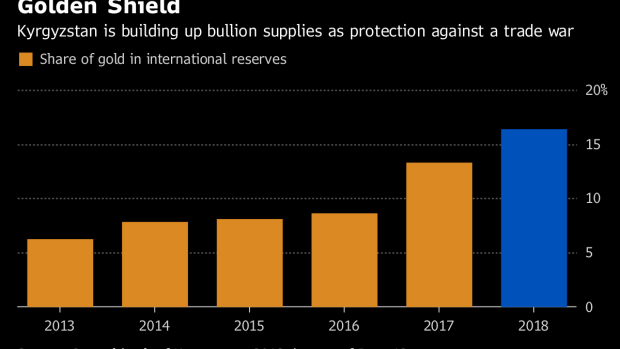 (Bloomberg) -- What do you do when your two biggest trading partners are embroiled in economic standoffs with the U.S.? You buy as much gold as you possibly can.

At least that’s what Kyrgyzstan’s central bank is doing in a bid to protect itself from currency volatility in China and Russia. The central Asian nation hopes to grow the share of gold in its $2 billion international reserves to 50 percent from around 16 percent now.

“The rules of the game are changing,” Kyrgyz central bank Governor Tolkunbek Abdygulov, 42, said in an interview in the capital, Bishkek. “It doesn’t matter what currencies we have in our reserves; dollars, yuan or rubles all make us vulnerable.”

Having watched the Kyrgyz currency slump to a record low in 2015 during Russia’s currency crisis and standoff with the West, the mountainous nation of 6 million people isn’t risking its luck with a brewing trade war between the world’s two biggest economies. Kyrgyzstan is heavily reliant on China and Russia for imports and on Moscow for remittances from the army of migrant workers who go there in search of work.

The policy has put Kyrgyzstan’s gold holdings as a percentage of total reserves close to the level held by Russia, and above emerging-market economies such as India and Turkey, according to data from the World Gold Council. The U.S. and Germany have more than 70 percent of their reserves in gold.

After surging during the past decade, bullion has been stuck in the doldrums for most of this year as the outlook for higher borrowing costs dimmed prospects for the metal, which doesn’t pay interest. The commodity was trading near a six-month low on Wednesday as the escalating standoff between the world’s two biggest economies over trade tariffs strengthened the dollar.

Read this story for more on how much U.S. tariffs could hurt China’s economy

Kyrgyzstan is well placed to build up stockpiles, because the precious metal is its biggest export. Since 2014 the central bank has had a policy of buying up about as much of the country’s $3.4 billion annual output as possible, Abdygulov said. The country’s biggest mine is operated by Canada’s Centerra Gold Inc. with production sold outside of Kyrgyzstan.

The Kyrgyz central bank was one of the first of the post-Soviet republics to adopt its own currency, the som. The exchange rate was allowed to float freely in 1993, but the central bank still relies on interventions to prevent excessive volatility. The som has outperformed most regional peers in 2018, strengthening just over 1 percent.

Abdygulov is aiming to switch to inflation targeting by the end of his seven-year term in 2024. Until then the best he can do is to grow, or at least preserve, the nation’s international reserves.

“If we decide to sell gold, then we can easily sell it and convert into the currency we need,” Abdygulov said. “Taking into consideration that we mine a lot of gold in our country, it’s God-given that we should keep a large part of our reserves in gold.”