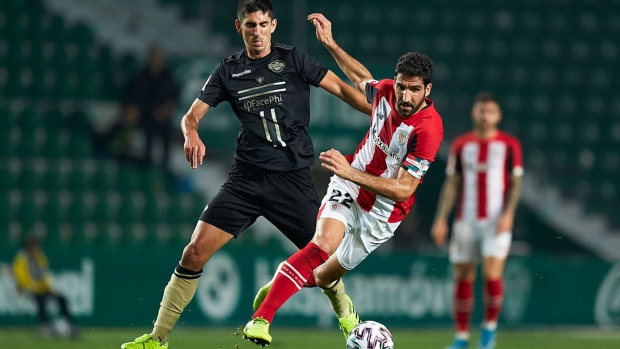 (Bloomberg) -- A sporting minnow poised to become Spain’s first listed soccer club may blaze a trail for bigger teams to follow suit, according to a fund manager investing in much bigger European clubs.

Last month, shareholders of CF Intercity backed plans to list the Spanish fourth-division team based in Sant Joan d’Alacant, a town on the Mediterranean coast. At about 4.5 million euros ($5.5 million), its initial market value will be tiny.

Even so, the listing is “great news,” Luis Garcia Alvarez, portfolio manager at Mapfre AM Behavioral Fund, said in an interview. “Intercity isn’t going to be the only one -- it will open the door of the stock exchange for more clubs.”

Intercity may be small compared with the storied giants of Spanish sport such as Real Madrid, but the listing could alert investors to the virtues of the country’s soccer set-up, said Garcia. For one thing, Spain’s LaLiga has put in place rules to cap overall spending on player squads, shielding investors from bloated team costs and debt piles.

“It’s the market with the highest financial safety, because the Spanish league has set up the hardest checks among top European tournaments,” he said. “It’s almost like regulation forces clubs to earn money.”

Intercity, whose shares are expected to start trading by the end of June, is currently waiting to register documents for the listing, chairman Salvador Marti told Bloomberg in response to questions.

Garcia has invested about 10% of the almost 65 million euros he manages in three soccer clubs, including Germany’s Borussia Dortmund GmbH and OL Groupe SA, which operates France’s Olympique Lyonnais.

The sport is an example of a business that’s made strides to improve its financial underpinnings, Garcia said. For example, the Union of European Football Associations (UEFA) introduced new financial fair play rules in 2010, encouraging clubs to balance their books.

Tapping the stock market for funds could become an attractive option for more teams after a pandemic-hit season in which match ticket and merchandising sales plummeted. However, some of Spain’s biggest soccer clubs including Real Madrid are fan-owned and can’t take that route.

Since the Mapfre fund’s inception in April 2018, it’s racked up a total return after fees of 28%, compared with 21% for its benchmark, the Stoxx Europe 600 Net Return index.

So far this year, Garcia’s soccer bets are mostly paying off. Dortmund is up 21% since the start of the year, while OL Groupe has gained 5.6%.

Shares in Dutch League champion AFC Ajax NV, the third club in which the fund has a position, dropped 3.4% in the same period. That’s still better than big listed rivals such us Juventus Football Club SpA and Manchester United Plc, which both declined around 5%.