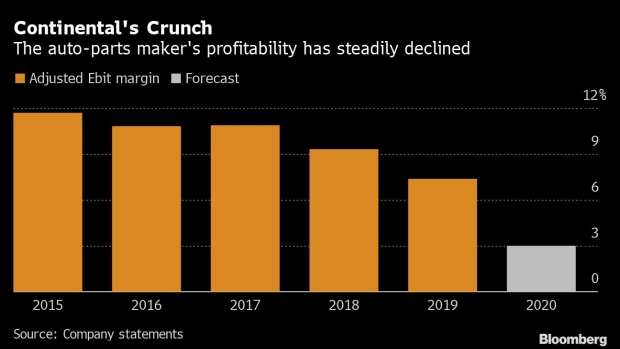 (Bloomberg) -- Continental AG sees its profitability shrinking for the fourth time in the last five years, a reflection of just how much earnings are under pressure at the German auto-parts supplier that’s searching for a new CEO.

Continental predicted an adjusted earnings before interest and taxes margin of about 3% for the full year on Wednesday. That’s below analyst estimates and compares with the 5.5% to 6.5% margin the components maker forecast early this year, only to withdraw that outlook due to the Covid-19 pandemic.

Europe’s second-largest car-parts maker is seeking a new chief executive officer after Elmar Degenhart tendered his resignation last month for health reasons. Investors are hoping that his successor will overhaul the firm’s complex structure with more resolve; the company is weighing the sale of its turbocharger unit as part of the change, Bloomberg reported last month.

“The global automotive markets still have years to catch up and are stuck in the middle of a far-reaching, technological transformation,” said Degenhart, whose resignation is effective Nov. 30. “Given that coronavirus cases are rising again, markets worldwide remain unpredictable.”

The auto industry is dealing with the fallout from the pandemic at the same time it faces pressure to invest in new technology as the combustion era gradually draws to a close.

Continental’s earnings are being hit by restructuring costs after the company intensified a push to restore profits in a plan that could lead to 30,000 jobs being shifted or eliminated. Its adjusted Ebit margin has steadily shrunk from 7.4% in 2019 and 9.3% the prior year.

Continental may spin off its Vitesco powertrain unit next year if markets continue to recover, Chief Financial Officer Wolfgang Schaefer said in a telephone interview. The manufacturer had shelved those plans in April because of the pandemic. Continental plans to update investors next month on its strategy in areas from automated driving to high-performance computers for electric cars, Schaefer said. He declined to comment on a possible sale of the turbocharger business.

While China and North America’s auto markets developed better than expected during the third quarter, Europe’s declined markedly, including in Continental’s home market Germany. The company expects sales to drop to about 37.5 billion euros ($44.3 billion) this year.

Continental fell 2.8% at 11:08 a.m. in Frankfurt. The shares have declined about 10% this year, valuing the company at about 21 billion euros.