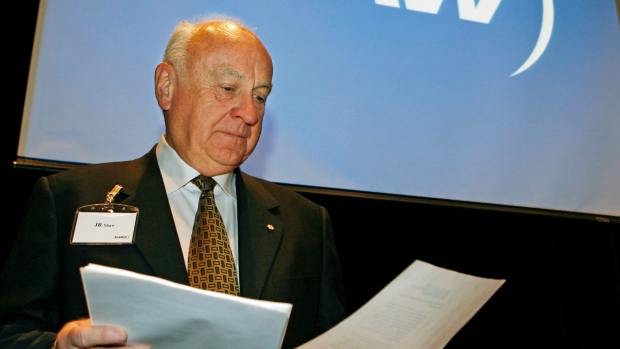 Shaw Communications Inc. announced the death of its founder, executive chair and former chief executive officer, JR Shaw, Tuesday afternoon. He died at the age of 85 on Monday, according to the company.

Shaw built the Calgary-based telecommunications giant from the ground up, starting with the launch of Capital Cable Television Co. Ltd in 1966. As of the end of November 2019, Shaw Communications had a total of 7.15 million subscribers across its operating units.

"My family and I are at a loss for words and are deeply saddened at JR’s passing,” said CEO Brad Shaw, JR’s son, in a release.

“I spoke to JR every day about the business. He was engaged and interested in everything the company was doing – from the latest technology being rolled out to how we were meeting the needs of families across Western Canada."

Praise for JR Shaw poured in from political and business leaders late Tuesday. On Twitter, Alberta Premier mourned the passing of "one of Alberta's titans of business and philanthropy."

In a release, BCE Inc. CEO Mirko Bibic heralded JR as "an inspirational entrepreneur whose vision and determination made Shaw Communications into a competitive force in Canada telecommunications."

Saddened by the loss of one of Alberta’s titans of business & philanthropy, JR Shaw.

From humble beginnings in Sherwood Park in 1966, JR built one of Canada’s largest telecommunications & media companies.

My sincere condolences to the Shaw family. RIP. https://t.co/kHkjZrTeD1 pic.twitter.com/rO25LgmLQz

So sorry to hear of the passing of JR Shaw a true Calgary business leader and pioneer.

I remember meeting him a few years ago and being struck by how incredibly smart he was and the very tough questions he asked. He will be deeply missed.https://t.co/Ml15ccjn82

JR remained chief executive of the company he founded until 1998, when his son Jim took the reins before passing them to Brad in 2010. Jim died in early 2018 after a brief illness at the age of 60.

Brad will add the role of executive chairman to his duties as CEO on an interim basis, pending confirmation at a board meeting next month.