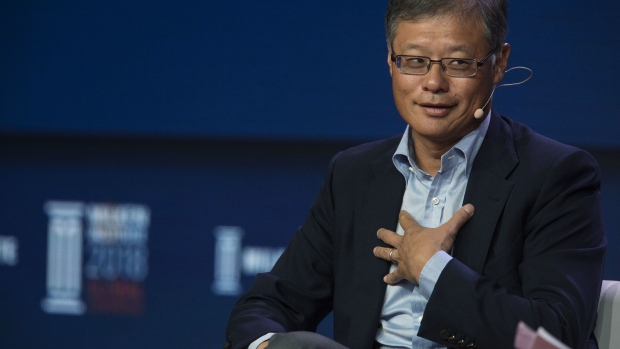 (Bloomberg) -- On city streets, on most days, Amazon delivery vans , UPS trucks, Ubers and vehicles for instant delivery services all vie for space. A Los Angeles-based company is aiming to solve the problem of urban congestion and the emissions that come with it by swapping out the delivery trucks with cargo e-bikes. URB-E is carving out a high-density niche in the market for electric commercial vehicles, which market intelligence advisory Guidehouse Insights says is expected to hit $370 billion by 2030. They want to build an ecosystem around cargo e-bikes, aiming to expand from 50 to 500 of them by next year.

“Cargo e-bikes let delivery workers avoid car traffic congestion, reduce pollution and are safer vehicles on our streets than trucks,” says Sarah Kaufman, associate director of Rudin Center for Transportation at New York University. “Cities all over the world are starting to reshape themselves for smaller-form vehicles and more human-powered transportation; cargo e-bikes fit perfectly into this vision.”

URB-E, which started out as a company that made mini e-scooters, is pivoting to monetize the demand from companies that need their own low-emissions delivery systems. URB-E makes its own workhorse e-bikes in China, which are geared to haul large loads (800 pounds) at low speeds and fit into a parking space with 20 folded containers. The bikes feature a double-wheel and brake system like those used in aircraft. A hitch and suspension allow for more stability on fraying road infrastructure in their first locations of New York and Los Angeles.

URB-E provides the vehicles, but not the drivers. The startup trains clients on how to put their own drivers on the e-bikes and offers an e-bike valet service to help manage charging. It’s an experiment, but one thing is for certain: this isn’t another home delivery company bringing you lunch. They want the bigger market of high-volume cargo for companies. Containerized boxes make it easier to move cargo off of trucks coming into the cities and onto trailers for e-bike delivery, said chief executive officer Charles Jolley.

“We’re really specifically not focused on ‘get me a burrito, a coffee, a toothbrush in 15 minutes,’” said Jolley. “We’re trying to replace trucks and vans with something that’s 90% less energy.”

The company’s clients have ranged from UPS to Square Roots, which had been delivering its produce grown in the company’s vertical farm in Brooklyn by rigging a trailer to consumer e-bikes and loading it up with veggies. One URB-E co-founder described that as “like trying to use a Prius to do the work of a tractor.”

UPS used URB-E bikes in a trial as part of its expanding “last-mile” logistics solutions that involve more than 30 projects, and the company continues to look for urban logistic solutions as part of its bid for carbon neutrality by 2050, says Luke Wake, UPS Vice President of fleet maintenance and engineering.

Square Roots, which is backed by Kimbal Musk, said the new partnership helps guarantee fresh food is available all year round, which wasn’t necessarily the case in pandemic-era supply chain disruptions. URB-E’s containerized system has the capacity for insulated cold storage bags to protect fresh produce. The bikes can be used for about 100 local grocery stores in the New York area, which are within 5 miles of the group’s farm. A recent Instagram post crunched the numbers: 30 pounds of carbon saved on 25 miles per week.

URB-E started back in 2012 with ambitions of making the world’s most compact e-vehicle at the time. They came up with a foldable mini e-scooter with a range of 20 miles and a top speed of 15 miles per hour, which had some success in places like the campus of co-founder Peter Lee’s alma mater, University of Southern California.

The company had created a new vehicle for micromobility, but scaling up required entering a crowded race with deep-pocketed competitors like Lime and Bird.

“Our choices were to die, or to take all these learnings we had identified and pivot,” said Lee.

The URB-E co-founders had noticed that the cargo wagons they started supplying to a local fire department along with the scooters were in high demand, and UPS was even putting in requests for them. Lee and his team took a step back — what if they started designing not just scooters, but a whole electrified ecosystem for deliveries that could replace urban trucks, down to the logistical hubs, mechanic shops and gas stations? He could lean on co-founder Sven Etzelsberger’s design expertise from years leading Porsche’s team, to make a fleet of e-bikes for heavy loads, compact bike trailers for containerized cargo, and the charger hubs to power them.

Delivery is just one niche in the blossoming e-cargo bike market, which ranges from rigs for families and commuters to delivery programs by UPS, which developed with Rytle its own custom-made fleet of cargo e-bikes in Europe. Matt Roorda, an expert on urban freight at the University of Toronto, plans to study that city’s newly-approved pilot program to allow for large e-cargo bikes, including the potential for freeing up city parking. He says the introduction of the new bikes could bring new challenges: handling safety in busier bike lanes and where to put new charging hubs. A bill in the New York state legislature to allow for wider cargo e-bikes is a start to addressing the issue, says NYU’s Kaufman.

Former New York Mayor Bill de Blasio began a pilot for cargo e-bikes starting in 2019, which included freight companies Amazon, DHL and UPS. URB-E’s swerve towards cargo started rolling out last year. The startup’s transformation caught the eye of Jerry Yang, the Alibaba board member who cofounded Yahoo! Yang, a user of URB-E’s mini-scooters, had come on as an early investor through his AME Cloud Ventures and invested again, drawn by the company’s ambition of creating a compact container delivery network to replace trucks and small electric vehicles. URB-E also counts UBS and Acadia Woods as backers.

Cars and trucks weren’t cutting it as a solution amid rapid urbanization, said Yang, whose bet on Alibaba in 2005 brought one the biggest payoffs for Silicon Valley investors in China. Cargo e-bikes, like drones and autonomous robots, are likely the future for cities, where the problem of last-mile delivery is the hardest part of the supply chain to solve at scale, Yang said by email.

“Every e-commerce company today is wrestling with how to meet the huge increase in demand while also trying to meet CO₂ targets their customers and investors are asking for,” Yang said. “There will always be some deliveries that need a truck or van, but over time a very large percentage of deliveries can be converted to new vehicles built specifically for the size and scale of modern cities.”