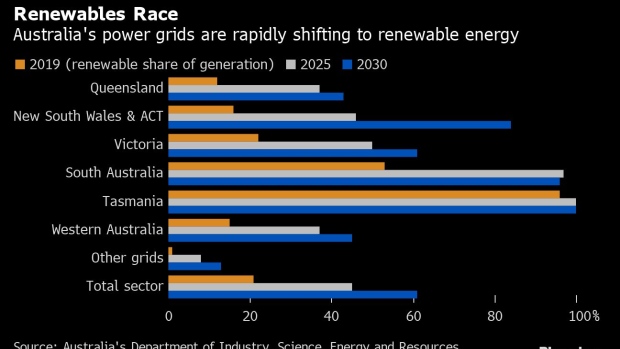 A Solarpro employee installs LG Electronics Inc. NeON R 370W solar panels onto the rooftop of a residential property in Sydney, Australia, on Monday, May 17, 2021. Australia is the global leader in generating electricity from the sun. Some 27% of buildings had a solar system on their roof at the end of 2020, the highest proportion in the world, according to figures from BNEF. Photographer: Brendon Thorne/Bloomberg , Bloomberg

(Bloomberg) -- More than in probably any other nation, it’s the rooftops of Australian homes that are driving a transition away from coal.

Astronomical growth in household solar will see a jump in renewables to 69% of generation in the main electricity network by 2030 from 23% in 2019, according to new government projections. That forecast is 14 percentage points higher than predicted a year ago.

“Higher penetration of renewable generation, driven by rooftop solar, particularly to the middle of the decade, and stronger wind deployment at the end of the decade, has delivered the majority of the revision,” the country’s Department of Industry, Science, Energy and Resources said in a report.

Australia’s total emissions are now forecast at 439 million tons in 2030, down from a forecast of 478 million last year and 624 million tons in 2005. Prime Minister Scott Morrison’s government has faced questions over its methodology, and the inclusion of reductions driven by the land-use sector.

Morrison on Tuesday committed to a net-zero target by 2050, but has been criticized for not setting a more ambitious goal for 2030.