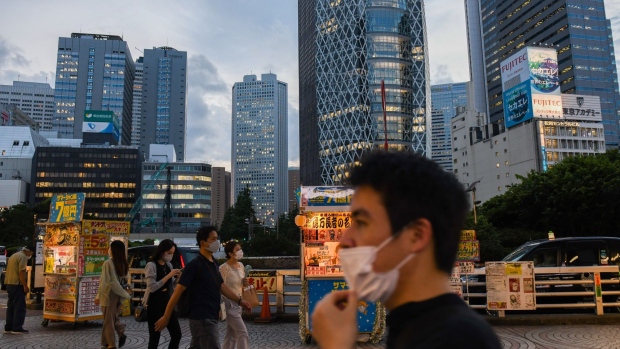 Evening commuters in the Shinjuku district of Tokyo, Japan, on Thursday, July 29, 2021. While the number of infections directly connected with the Olympics has so far been relatively low, Tokyo and its surrounding areas are experiencing their worst-yet virus wave. , Bloomberg

(Bloomberg) -- Tokyo reported a record 5,042 new coronavirus cases Thursday, as the Olympics held under unprecedented conditions due to the pandemic entered their final few days in the Japanese capital.

The leap from the previous day brought the seven-day moving average to about 3,646, while the number of serious cases rose to 135 from 115 the previous day, government data showed.

Japan’s worst wave of cases -- which has forced the government to maintain a state of emergency in Tokyo and several other areas -- has coincided with the staging of the Games. While the number of cases directly linked to the Olympics has remained low, the government’s top virus adviser said the event was likely to have affected the public’s attitude toward the disease, possibly making people more relaxed about precautions.

Japan has so far suffered far fewer infections and deaths than other Group of Seven advanced nations, but its vaccination program got off to a slow start and only about 32% of the population is fully immunized, compared with more than 50% in the U.S.

Tokyo 2020 organizers reported a record of 31 new virus cases connected with the Games Thursday, one of whom was an athlete. Most of the new infections were found among residents of Japan, who are part of the tens of thousands of people participating or working at the Olympics.

Prime Minister Yoshihide Suga expanded virus-related restrictions to eight of Japan’s prefectures earlier Thursday to rein in the spread, saying the virus was spreading at a rate not previously seen. He added that the number of serious cases was also beginning to rise.