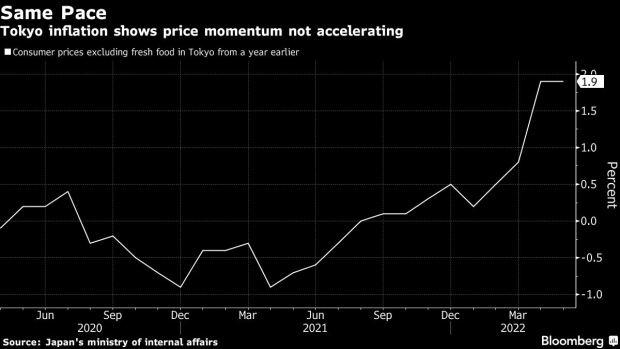 A customer picks up a package of fruit at a Takeya Co. store in the Ueno District of Tokyo, Japan, on Wednesday, April 20, 2022. Japan is scheduled to release its consumer price index (CPI) figures for March on April 22. , Bloomberg

(Bloomberg) -- The cost of living in Tokyo increased at the same pace as last month, underscoring the nation’s weaker price momentum compared with global peers and offering some support for the Bank of Japan’s stimulus stance.

Consumer prices excluding fresh food climbed 1.9% as the impact of accelerating processed food prices was canceled out by smaller gains in energy costs, according to ministry of internal affairs data Friday. Economists had expected a gain of 2% for the leading indicator of  the national trend.

The latest Tokyo figures offer another demonstration of how Japan’s price dynamics differ from the US and Europe, where central banks are taking concrete action to bring inflation under control.

A sharp acceleration in price growth in April has been complicating the BOJ’s messaging that it needs to continue with easing and look beyond temporary cost-push inflation.

National price increases topped the central bank’s 2% goal in April. But far from celebrating, Governor Haruhiko Kuroda has maintained his stance that inflation led by gains in energy prices is unsustainable. For now the economy still needs support from monetary easing as it recovers from the pandemic, he argues.

“Looking further ahead, we expect Tokyo’s core CPI to hover around 2% year on year in coming months. Prices of electricity and gas will probably continue to rise. Subsidies aimed at curbing gains in gasoline prices are likely to limit any further acceleration in energy prices -- unless the yen depreciates or crude oil prices climb.”

In April key inflation gauges for both Tokyo and Japan jumped by more than 1 percentage point from the previous month, after the drag from cell phone fee cuts a year ago began to fade.

Energy and processed foods are the other two main drivers. They accounted for about 1.6 percentage point of gains in Tokyo this month.

While the contribution of energy prices weakened a touch with gains in oil prices starting to peter out and government continuing measures to cap gasoline prices, processed food prices have been rising quickly in a sign of more companies passing their costs onto consumers in the face of the highest cost pressures since 1980.