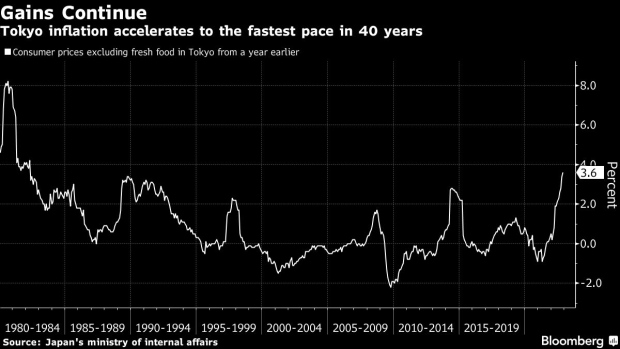 A customer picks up a can on beer from a shelf at a Summit supermarket store in Tokyo, Japan, on Tuesday, July 27, 2021. Tokyo's delayed Olympics is flipping conventional wisdom on its head, with Japans stay-at-home stocks expected to emerge as winners rather than once-favored advertisers, real-estate firms and travel operators. Photographer: Noriko Hayashi/Bloomberg , Bloomberg

(Bloomberg) -- Tokyo’s inflation outpaced forecasts to hit its fastest clip since 1982, an acceleration that suggests nationwide price growth will also quicken in November after months of yen weakness and elevated energy costs.

Consumer prices excluding fresh food rose 3.6% in the capital in November, with the faster pace driven by further gains in processed food prices, according to the ministry of internal affairs Friday. The reading was the highest since April 1982 and stronger than a 3.5% forecast by analysts.

The continued acceleration in core inflation challenges Bank of Japan Governor Haruhiko Kuroda’s view that the current cost-push inflation is only temporary and that continued stimulus is required to ensure price growth becomes sustainable.

With gains in energy costs likely to ease as ramped-up government subsidies come into effect in the coming months, economists largely agree with Kuroda that Japan’s inflation will soften, though views differ over the extent.

That means the BOJ is likely to stick with its rock-bottom interest rates during the remainder of Kuroda’s term. Market speculation is largely focused on what will happen after the governor departs in April.

“Given what the BOJ has said and its current inflation forecasts, I don’t think monetary policy will change in fiscal 2022,”  said SMBC Nikko Securities chief economist Yoshimasa Maruyama. “But if the new governor is pressured by the government over the weak yen, the BOJ could still move on policy” in fiscal 2023.

The Tokyo figures showed processed food prices rose 6.7% in November, contributing about 1.4 percentage point to overall inflation and outstripping the impact of energy. Much of that food including raw materials is imported and therefore directly impacted by the yen’s weakness.

Some 833 food items including dairy products saw price increases in November, according to a Teikoku Databank survey. The report also forecast that Japan will be hit by another wave of price hikes in February or March next year, with the costs of another 2,000 items expected to go up.

Real wages have been declining since April, adding to factors eating into consumers’ purchasing power and contributing to BOJ fears that a premature increase in interest rates could upend the economy.

“Looking ahead, we see core inflation hovering around 3.4% in 4Q and then slowing quickly in 1Q23. The weak yen should continue to buoy prices of processed foods and other imports. But subsidies to support discounts on electricity and gas bills starting in January could reduce core CPI inflation by as much as 0.8 percentage point in 1Q.”

Despite the continued acceleration of inflation and the historic slide in the yen the government hasn’t put pressure on the BOJ to adjust policy so far. Instead, when the Japanese currency neared 152 per dollar in October, the government spent 6.3 trillion yen to intervene the market.

Since then, with expectations rising over a slowing of Federal Reserve rate hikes, the yen has strengthened to around the 138.8 mark, a factor that could also help stabilize prices in Japan going ahead, though any positive impact for prices is likely to come with a lag.

In the meantime, policymakers, investors and economists will be keeping a close eye on the annual round of pay deals early next year. Kuroda has said stronger wage growth is a key factor for ensuring that inflation is lasting. The central bank under Kuroda has been seeking to achieve stable 2% inflation for the past decade.

“If the spring wage negotiations go well, there’ll be more space to shift policy next year compared to this year,” Maruyama said.