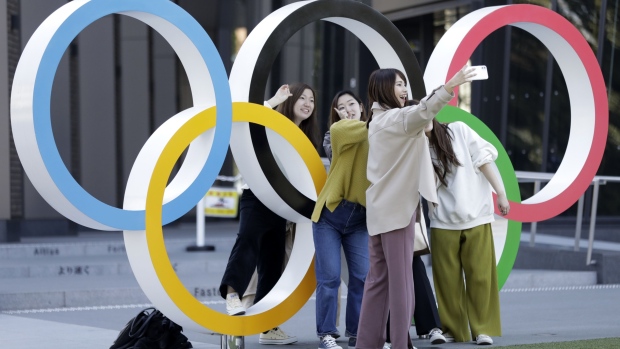 People pose for a selfie photograph with the Olympic rings installed outside the Japan Olympic Museum near the New National Stadium, the main venue for the Tokyo 2020 Olympic and Paralympic Games, in Tokyo, Japan, on Wednesday, March 11, 2020. , Bloomberg News

The 2020 Tokyo Olympics will be delayed by a year in the first postponement since the modern games began in the 19th century, becoming the biggest global event to be disrupted by the coronavirus pandemic.

Japanese Prime Minister Shinzo Abe said he and International Olympic Committee President Thomas Bach agreed to the unprecedented move in a telephone call Tuesday to delay the games that were set to begin in July. “The Tokyo Olympics and Paralympics will not be canceled,” Abe told reporters in Tokyo after the call, adding they will be held by the summer of 2021.

The coronavirus pandemic has made it all but impossible for aspiring Olympians to train and, in many cases, qualify for a July event. Abe said he received 100% support from Bach to delay the international sports event. They agreed to work closely to hold the games in complete form, symbolizing humanity’s victory over the coronavirus, he said.

The Tokyo Olympics were headed toward postponement this week as national teams made preparations pull out if the games went forward as planned. Abe acknowledged a delay may be unavoidable due to the coronavirus, which has caused more than 387,000 confirmed cases, led to a plunge in global markets and slammed the brakes on international travel.

The Olympic torch relay that was supposed to start later this week has been called off. Despite the delay, the games will still be called the 2020 Olympics, according to Tokyo Governor Yuriko Koike.

Several nations had been calling for the Olympics to be pushed back until at least 2021. That would cause logistical nightmares but would be far less painful than cancellation for the host, sponsors, broadcasters and others that have billions of dollars invested in the games.

A one-year delay would trigger about 641 billion yen (US$5.8 billion) in economic losses, according to an estimate by Katsuhiro Miyamoto, an honorary professor at Japan’s Kansai University.

Japan has spent more than $26 billion to ready Tokyo for the games, according to some estimates. With about 600,000 foreign visitors and more than 11,000 athletes expected to attend, the Olympics were supposed to reinvigorate the economy, which shrank an annualized 7.1 per cent from the previous quarter in the three months through December.

Abe told parliament Monday that the Olympics will have to be postponed if safety can’t be guaranteed for spectators and athletes due to the pandemic. The last time an Olympics was canceled was in 1944 due to World War II, and the games have never been delayed by as long as a year under the auspices of the IOC, which was established in 1894. The 1940 games were initially postponed, but then canceled.

Postponing by a year was the popular option leading up to Tuesday’s decision. After Australian Prime Minister Scott Morrison said the international travel ban currently in place would extend to the country’s Olympic delegation, the national team told its athletes to start training for 2021.

But a 2021 games has its own headaches, including a raft of sponsorship agreements set to expire in 2020 and a conflict with the global track-and-field championships. The scale of next year’s Olmypics is yet to be decided, Toshiro Muto, Tokyo 2020’s chief executive officer, said in a separate briefing.