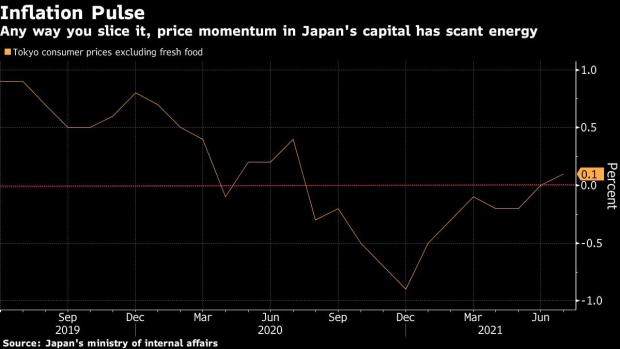 Evening commuters in the Shinjuku district of Tokyo, Japan, on Thursday, July 29, 2021. While the number of infections directly connected with the Olympics has so far been relatively low, Tokyo and its surrounding areas are experiencing their worst-yet virus wave. Photographer: Noriko Hayashi/Bloomberg , Bloomberg

(Bloomberg) -- Tokyo consumer prices unexpectedly rose for the first time in a year, another sign of a recovering inflation pulse in Japan, though the pace of gains was far from the levels fueling fears elsewhere in the world.

Prices in Japan’s capital, excluding those for fresh food, ticked up by 0.1% in July compared with a year earlier, the ministry of internal affairs reported Tuesday. Economists had expected prices in the city to stay flat for a second month following 10 months of falls.

“We expect Tokyo’s CPI gauges to pick up in August, aided by a lower base for prices last year, which were depressed by a government travel promotion campaign. Excluding that factor, the broad inflation trend remains weak.”