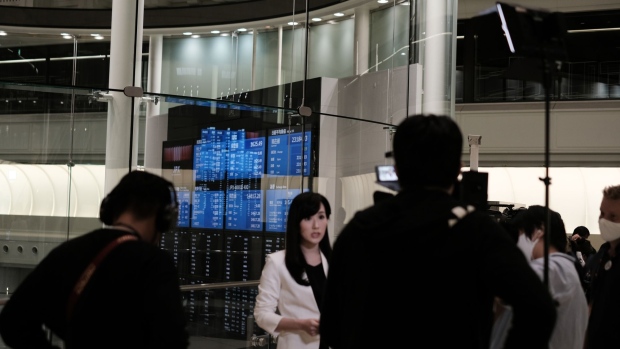 Members of the media work near a screen displaying share prices inside the Tokyo Stock Exchange (TSE) , Soichiro Koriyama/Bloomberg

The Tokyo Stock Exchange confirmed it will restart trading on Friday after an unprecedented all-day halt on Thursday which froze buying and selling of thousands of companies in the worst-ever outage in the world’s third-largest equity market.

All orders Thursday were canceled, and opening prices when trading resumes will be the closing prices on Wednesday, Japan Exchange Group Inc., the operator of the TSE, said earlier.

The problem occurred after to a failed switchover to backups following a hardware breakdown. The exchange made the decision to call off trading for the entire day after conferring with market participants, who said it would be difficult to deal with their clients and carry out orders.

“We have caused great inconvenience to many market participants, investors and listed companies,” TSE President Koichiro Miyahara said in a press conference in Tokyo. “We will take thorough steps to prevent a recurrence.”

The halt dampened investor sentiment following a positive U.S. stock market performance overnight and closures in other major markets in the region, including China, Hong Kong, South Korea and Taiwan for public holidays.

It also came on the first day of a new quarter and of the second half of Japan’s fiscal year, when trading volumes would typically be high as many funds adjust their positions. One of Japan’s most closely watched economic indicators, the Bank of Japan’s Tankan survey, was also released just 10 minutes before trading was set to begin.

The failure was the first all-day stoppage of trading since the exchange shifted from the open-outcry trading pit to a fully-electronic system in 1999. Previous system glitches had only affected part of the trading day.

“This is very problematic -- when things like this happen, investor confidence in the Japanese market gets impacted,” said Ryuta Otsuka, a strategist at Toyo Securities Co. “It could later weigh on Japanese stocks.”

Chief Cabinet Secretary Katsunobu Kato, the top government spokesman, said it was “extremely regrettable” that trading opportunities have been restricted. The Financial Services Agency is considering ordering the exchange to issue a report detailing the cause of the glitch and steps it will take to prevent a recurrence, Kyodo reported.

Global markets are on a heightened state of alert for any glitches after a cyber attack in New Zealand that spurred trading halts over four days in August, though Tokyo exchange officials said there were no indications Thursday’s outage was related to hacking, which occurred on hardware not directly connected externally. Deutsche Boerse AG’s electronic-trading system has also suffered two major outages this year.

Other markets in Japan, including exchanges in Sapporo, Nagoya, and Fukuoka, also suspended trading on Thursday. Derivatives, including futures, trade on the Osaka Exchange, which was not impacted by the system issue.

The benchmark Topix index dropped two per cent Wednesday, trimming its gain for September to 0.5 per cent and closing the latest quarter with a 4.3 per cent advance. A Tokyo-based equity trader at a local brokerage said mutual-fund flows for the beginning of the month and second half of the fiscal year will now be queued up, which could add to volatility tomorrow if the bourse doesn’t open today.

Japan’s $6.1 trillion stock market is the third-largest in the world behind the U.S. and China. There are 2,167 stocks listed on the the top section of the Tokyo Stock Exchange, where total daily turnover has averaged about $22 billion over the past year.

Makoto Sengoku, a market analyst at Tokai Tokyo Research Institute Co., said he’ll be watching the reaction in the TSE Mothers Index, the main gauge for startup companies in Japan. “For retail investors that are trading everyday, today might be a shock, but for those who aren’t frequently trading it’s not as impactful,” he said.

A series of computer issues in the mid-2000s led to the resignation of the exchange president. Trading was halted for 4 1/2 hours in 2005 due to a botched system upgrade, the first time equity trading had been completely suspended. In January 2006, the exchange halted trading early after a surge in orders, triggered by an investigation into high-flying internet company Livedoor Co., overloaded its computer systems. That resulted in shortened trading hours for three months.

The Tokyo exchange introduced its faster Arrowhead system, developed by Fujitsu Ltd., in January 2010, but that didn’t solve the issues entirely. A computer glitch in 2012 halted trading in 241 securities, while a system error later that year took took derivatives trading offline.

The current Arrowhead system was installed in November 2019, officials said, with equipment supplied by Fujitsu. Tokyo Stock Exchange officials said that as the market operator, it accepted responsibility for the outage, and that Fujitsu was merely a vendor. TSE CEO Miyahara said there were no plans at the moment to seek damages from Fujitsu.