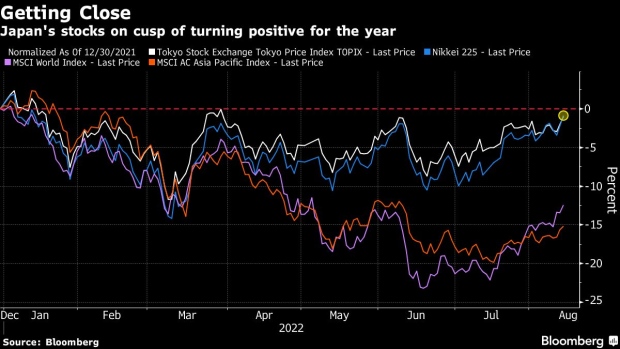 An evening commuter walks past the Bank of Japan (BOJ) headquarters in Tokyo, Japan, on Sept. 27, 2021. The Bank of Japan will release its quarterly Tankan business sentiment survey on Oct. 1. , Bloomberg

(Bloomberg) -- In what has been an annus horribilis for most developed-market equities, Japanese investors find their blue-chip benchmark back in positive territory for the year.

Helped by a weaker yen and continued stimulus by a resolute Bank of Japan, the Nikkei 225 index has outperformed peers and erased its 2022 losses Monday. Its 0.3% gain compares with the almost 13% decline in the MSCI AC World ex Japan Index and a 15% drop in the MSCI Asia Pacific Index.

While central banks around the world have been tightening monetary policy amid rising inflation, Japan’s has defied convention and stuck to rock bottom interest rates to bolster it’s stuttering economy. That has also pushed the yen lower -- it’s the worst performing Group-of-10 currency this year -- and helped export-heavy Japan Inc. beat forecasts and deliver positive results.

A four-week rally in US equities has also helped improve sentiment toward the global stock market, helping power more recent gains in Japan.

“US stocks have risen so much and the fact that Japanese stocks are being bought reflects expectations that the economy will not fall that far and that there will be a soft landing,” said Mamoru Shimode, chief strategist at Resona Asset Management Co Ltd.

Strategists at Jefferies Financial Group Inc. including Sean Darby see tailwinds ahead that could help Japanese shares push on, including a pick up in money supply, consumer confidence on the brink of turning and a positive economic outlook relative to peers.

“As many economies slip into recession, slowdowns or indeed stagflation, Japan is producing a decent collection of investment ideas that seem to be overshadowed by the BOJ’s unorthodox support of yield curve control,” they wrote in a recent note. The team recommended investors consider a basket of Japanese value shares with exposure to the domestic economy.

Still, not everyone is as positive.

Although results from every sector beat or came in line with consensus earnings in the most recent reporting season, only two sectors -- consumer staples and utilities -- saw positive market reactions.

“The afternoon session showed that the momentum to break out of the 29,000-yen level was still not quite there,” said Hitoshi Asaoka, a strategist from Asset Management One Co Ltd. of the Nikkei. “For the time being, we will watch the data and macro indicators.”

For foreign investors in Japanese shares, the blue-chip gauge has still fallen about 13% in dollar terms.

Koichi Fujishiro, a senior economist at the Dai-Ichi Life Research Institute, sees limited upside ahead for the index.

“The downside risk factor is still significant and with four months left in the year, it would be difficult for the Nikkei to reach the 30,000 yen level,” he said.