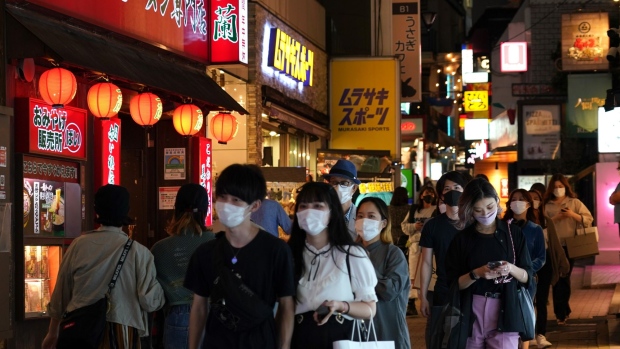 People wearing protective masks walk past bars and cafes in the Shibuya district of Tokyo, Japan, on Saturday, Oct. 9, 2021. In Japan, vaccinations rates are up, infection case are way down, and the emergency lifted at the start of October. Thats boosting optimism that spending may rebound in coming months as new Prime Minister Fumio Kishida launches his administration. , Bloomberg

(Bloomberg) -- Tokyo is set to roll back restrictions that limited the operating hours and alcohol service of bars and eateries from Monday, as coronavirus cases drop nationwide and authorities look to open more parts of the economy.

The Tokyo Metropolitan Government plans to formally lift the restrictions for restaurants and bars that meet its criteria for taking appropriate measures to limit the spread of infections, Kyodo News and other local media reported, citing unnamed officials.

The move would have a widespread impact in Japan’s capital since about 85% of those establishments have already met the requirements, according to national public broadcaster NHK.

Some 102,000 eateries certified as taking anti-virus measures have currently been asked to stop serving alcohol by 8 p.m. and close by 9 p.m., Kyodo said. Under the new guidelines, Tokyo’s government is asking restaurants to set a limit of four customers to a table, it added.

Separately, Oriental Land, the operator of Tokyo Disneyland and DisneySea parks, will extend operating hours from Nov. 1 at one of the biggest tourists destinations in Asia. It also said it would start increasing the number of visitors allowed to the parks from Monday.

The moves come as daily recorded Covid-19 cases in Tokyo have dropped to double digits from Oct. 9 after hitting over 5,000 several days in August during a wave powered by the delta variant.

Japan at the end of September lifted a national virus emergency in place for Tokyo and 18 other areas, easing restrictions that have dragged on the economy.

The national government at that time said certified bars and restaurants that take precautions, such as installing perspex screens and adequate ventilation, would be allowed to serve alcohol until 8 p.m. and open until 9 p.m. at the discretion of local authorities.