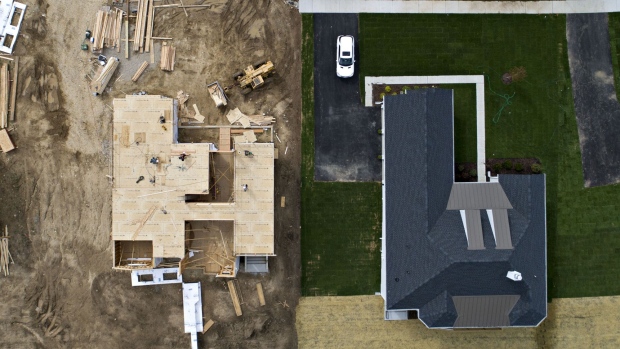 A house under construction stands next to a completed home at the Toll Brothers Inc. Bowes Creek Country Club community in this aerial photograph taken over Elgin, Illinois, U.S., on Wednesday, Sept. 26, 2018. U.S. construction spending inched up 0.1% in August. , Bloomberg

(Bloomberg) -- Toll Brothers Inc., the largest US luxury-home builder, cut its sales forecast and said it has increased buyer incentives to help navigate a slowdown in demand.

The company expects to deliver 10,000 to 10,300 homes in its full fiscal year, down from a previous estimate of 11,000 to 11,500 homes, according to a statement Tuesday. For the three months through July, Toll reported a 60% decline in purchase contracts from a year earlier to 1,266, surprising analysts who expected 2,568 deals on average.

In more recent weeks, the company said it has seen a bump in demand and has started to “modestly increase incentives,” executives said on a conference call with investors Wednesday. Sales in August included incentives of about $30,000, up from roughly $12,000 in May, $15,000 in June and $22,000 in July.

“As summer is winding down, we’re going to continue to see better traffic, higher-quality traffic, but we recognize it is certainly more of a buyer’s market and we will act accordingly,” Chief Executive Officer Douglas Yearley said on the call.

After a pandemic sales rush, US builders are facing plummeting demand, with purchases of new homes in July falling to the slowest pace since 2016, according to the latest government data. The slump is pushing many companies to offer discounts and other buyer incentives to avoid a pileup of inventory.

Toll’s customers are mostly move-up buyers who can afford houses selling at an average price of about $1 million. Still, mortgage rates that have almost doubled since the start of the year have cut into their purchasing power, while slowing sales of existing homes have made it harder for potential buyers to trade up.

Sharply higher rates and home prices, stock market volatility and economic uncertainty led to a “significant decline in demand” during Toll’s fiscal third quarter, Yearley said in the statement. “However, in more recent weeks, we have seen signs of increased demand as sentiment is improving and buyers are returning to the market.”

New York City was among the company’s best markets in the quarter, a shift from earlier in the pandemic when people were leaving cities, executives said on the call. Currently, other strong markets include New Jersey, Philadelphia and Atlanta. Among the weakest areas are such Covid boomtowns as Phoenix; Austin, Texas; and Boise, Idaho.

For Toll, the full impact of the slowdown is likely to stretch into 2023 because the company’s homes take longer to build, Bloomberg Industries analyst Drew Reading said after the results were announced Tuesday.

“The move-up market will continue to face unique challenges as current homeowners are less inclined to trade up due to massive home-price gains and the likelihood they carry a significantly lower rate on their current mortgage,” Reading said in an email. “The higher end of the market also tends to be more discretionary, which means ongoing volatility in the stock market could remain an overhang.”

(Updates with best- and worst-performing markets in ninth paragraph.)