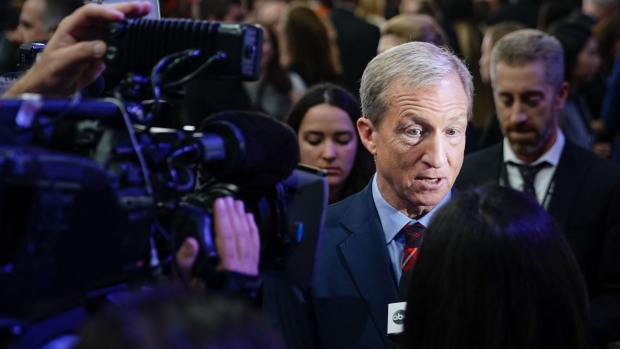 (Bloomberg) -- Billionaire Tom Steyer has blown past the $100 million he committed to his Democratic presidential campaign by more than 25% and now says there is no ceiling on what he will spend if it keeps paying off.

It remains to be seen whether that tactic will work.

Steyer received 1% support in a Quinnipiac national poll of registered voters taken last week. But he’s scored a second-place showing in a recent poll in South Carolina, which holds its primary at the end of February.

All the money has helped build name recognition for a presidential candidate who’s never held elective office and was best known for appearing in advertisements calling for the impeachment of President Donald Trump.“We haven’t put a ceiling on the spending, we are not going to do that, especially now that we’ve seen the encouraging polling,” said campaign spokesman Alberto Lammers.

While he has been a top spender, Steyer’s ad buys don’t match the $225 million spent so far by the other billionaire in the race, Michael Bloomberg. Their strategies are different, though, with Steyer concentrating in the four early states. Bloomberg is skipping them, preferring to focus on the delegate-rich states that vote on Super Tuesday on March 3.

Since joining the race last July, Steyer has spent more than $128 million on television, cable, radio and digital ad buys, according to Advertising Analytics, which tracks political commercials. He’s also opened 32 campaign offices, hired a staff of 448 and put paid employees in a dozen states, but campaigns have only reported that kind of spending to the Federal Election Commission through Sept. 30.

Steyer, who founded investment company Farallon Capital Management in 1986, is an environmentalist and activist. He is the all-time leading donor to Democratic candidates, committees and allied super political action committees, to whom he’s given almost $248 million, according to the Center for Responsive Politics. In 2017 he started Need to Impeach, a super-PAC dedicated to raising popular support for removing Trump from office.

To give an idea of the scope of Steyer’s outlays in the Democratic presidential contest, the top fundraiser, Vermont Senator Bernie Sanders, has raised about $96 million and spent just $25 million on advertising.

Some of Steyer’s investment does appear to be paying dividends. He ranked second in South Carolina with 15%, behind only former Vice President Joe Biden, in a Fox News survey released Thursday. He tied with Massachusetts Senator Elizabeth Warren at 12% for third in Nevada behind Biden and Sanders, another Fox News survey showed.

During Tuesday’s pared-down Democratic president debate in Des Moines, Iowa, he had more than 12 minutes of speaking time, the most attention he’s received from moderators, though it was less than his rivals, according to the a tracker maintained by the New York Times. He discussed climate change, a signature issue for him, longer than any other candidate, winning plaudits from some Democratic operatives for his answers.Lammers points out that aside from just appearing in commercials, Steyer has held more than 400 campaign events, most of them in the early voting states of Iowa, New Hampshire, Nevada and South Carolina.The money’s effect can’t be ignored, but it remains to be seen how durable it will be. “Steyer’s ads could certainly be having an effect in places where he generally has had the airwaves to himself,” said Michael Franz, co-director of the Wesleyan Media Project, which studies the impact of political advertising.

Having deep pockets has allowed Steyer to go big in Nevada, with $10.7 million worth of ads, and South Carolina, where he’s purchased $14.1 million worth. By comparison, the four candidates who’ve raised the most money so far, Sanders, Warren, Biden and former South Bend, Indiana Mayor Pete Buttigieg, have among them spent only $6.2 million in both states, about a quarter of Steyer’s outlay.

Franz questions whether Steyer’s poll numbers will remain strong when other candidates, especially those who finish at the top in Iowa and New Hampshire, start crowding the airwaves in Nevada and South Carolina. “That’s the big test of how much of an impact his ads are having,” Franz said.

So far, Steyer isn’t faring as well in states where other candidates have made big financial commitments. In Iowa, which holds its caucuses on Feb. 3., Buttigieg has spent $8.7 million and Sanders has made ad buys totaling $7.9 million. Steyer, who tops them with $10 million, is polling at just 2.7% in the RealClear Politics polling average. He’s bought $14.8 million of ads in New Hampshire, also the top outlay, but registers just 3.3% in the RCP average.“A good showing in Iowa and New Hampshire is still important,” Lammers acknowledged. “The momentum we need to get in the early states needs to carry through to the other states.”Robin Kolodny, a professor of political science at Temple University, said she isn’t sure that a strong showing would be enough to help Steyer, noting that it is the winners who get attention from voters, donors and the press.

“Right now we’re in a void where there aren’t any proven delegate winners out of Iowa and New Hampshire,” she said. “That’s going to be the spotlight.”

To contact the reporter on this story: Bill Allison in Washington DC at ballison14@bloomberg.net

To contact the editors responsible for this story: Wendy Benjaminson at wbenjaminson@bloomberg.net, Magan Crane, John Harney