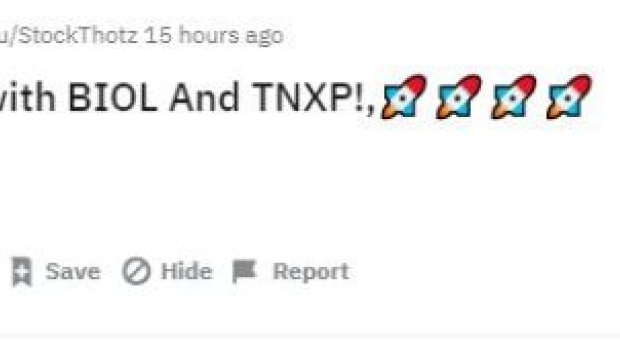 (Bloomberg) -- Tonix Pharmaceuticals Holding jumped as much as 24% early Wednesday, the latest in a group of tiny health-care stocks to get a boost in volume, after day traders touted the company on message boards for no apparent reason.

Trading in micro-cap companies that most Wall Street professionals ignore has made up roughly 20% of all U.S. stock market trading volume lately. Much of that action is driven by newly minted traders stuck at home during the pandemic, and the biotech sector in particular seems to have captured their imagination on the Robinhood platform and Reddit message boards.

“Out with ZOM in with BIOL And TNXP!,” posted one Reddit user, referring to the small-caps by their tickers. As if in response, Zomedica Corp. halted a three-day rally, spurred on by animal rights activist of Tiger King fame Carole Baskin, that sent the pet medicine company up 225% to a more than two-year high. The stock was down as much as 38% Wednesday, on more than 220 million shares traded.

So far, more than 50 million Tonix shares have changed hands Wednesday. Yesterday’s trading volume was more than seven-times normal. Biolase Inc. jumped as much as 33% in early trading before the move melted dropping 17%. The dental laser company had surged 80% on Tuesday and has already more than doubled in 2021.

Some of the companies benefiting from the rallies, such as TransEnterix Inc, are using the share gains to bolster cash positions. The medical device company reported on Tuesday a direct stock offering worth $31.3 million after its shares more than doubled this year.

Tonix declined to comment on the share move but noted through a third party spokeswoman that a recent $40 million stock offering “strengthens our balance sheet.”

An outside representative for Biolase said the company has no plans for a cash raise in the near-term and attributed the gains in part to positive news on its dental laser that spreads less matter into the air and could limit the spread of pathogens like Covid-19. The company ended September with a little more than $19 million of cash on hand.