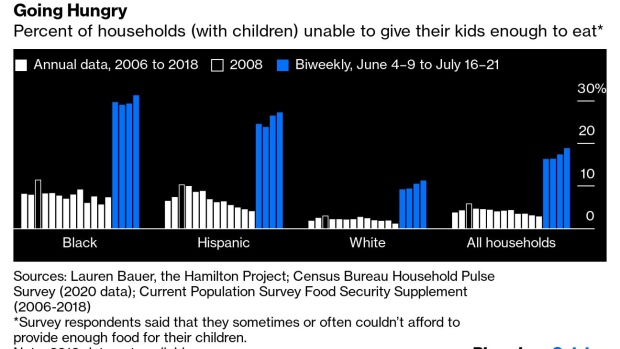 (Bloomberg Opinion) -- It’s hard to believe that America’s legislators, whatever their political leanings, would willingly allow millions of children to go hungry. Yet that is what’s happening during the Covid-19 crisis — and unless Congress acts quickly, the problem’s about to get worse.

In one of the world’s wealthiest nations, food insecurity should not be an issue. Yet it is. Even in good times, the government’s Supplemental Nutrition Assistance Program (also known as food stamps) falls far short of reaching everyone in need. As of 2018, some 2.5 million children lived in households that reported being unable to give their kids enough to eat. Such deprivation has long-term consequences for health and broader well-being.

Now, Covid-19 is testing the safety net like never before. As of late July, children faced food shortages in 19% of the households where they lived, according to the Census Bureau’s Household Pulse Survey. That’s about 16 million children going hungry, more than triple the peak of the 2008 recession. Black and Hispanic families have been among the hardest hit: Their rates of child food insufficiency were 31% and 27%, respectively.

Congress is making things worse by allowing relief measures to lapse. Expanded unemployment benefits, which provided an added $600 a week through July 31, reduced food insufficiency by an estimated 30%. Pandemic Electronic Benefit Transfers, which aimed to compensate families whose kids missed free or reduced-price lunches due to school closures in spring, had a similar effect through the summer. Without such supports, the number of kids going hungry is likely to double. It’s already on the rise.

Extending unemployment benefits and school-lunch compensation would help maintain the status quo. Ultimately, though, what’s needed is an ambitious commitment to food security. Congress should redesign the supplemental nutrition program to ensure adequate food for all who need it, and automatically boost benefits during recessions. This would have the further benefit of providing an especially effective countercyclical stimulus: Research suggests that each dollar of food assistance can generate $1.50 or more in economic activity, because it’s so well targeted to people who will use it.

At the very least, legislators should increase food assistance until the crisis recedes, as they did with good results during the last recession. The cost is relatively small. Even a 30% increase in the maximum benefit — which would get families close to what the Department of Agriculture defines as the cheapest healthy diet — would probably cost less than $50 billion a year while in effect.

This is a good use of taxpayers’ dollars. Congress should act without further delay.