Two years after Canada legalized recreational cannabis, the country is awash with the stuff.

Hundreds of thousands of kilograms of cannabis sit idle in producers' vaults. Warehouses operated by provincial wholesalers are filled to the brim with finished products. Meanwhile, illicit growers remain active and add to a country-wide stockpile that is far outpacing market demand.

The mountain of pot is expected to balloon further once producers – both legal and illicit – finish their "Croptober" harvest, the term used within the cannabis industry in reference to the period around October when outdoor cannabis crops are chopped down and processed.

"There has been too much cultivation in Canada," said Rahul Sarugaser, managing director of equity research at Raymond James, in a phone interview. "But that is secondary to the fact that there have been too many players and as a result, there's too much competition in the market."

There are 507 producers that Health Canada has licensed to grow cannabis legally, with roughly 60 of them selling into the recreational market. That's created a market where there are 45 million packaged cannabis products held by cultivators, processors, distributors, and retailers across the country, roughly four-and-a-half times the amount being sold in June, according to recent Health Canada figures.

That supply imbalance is causing major headaches for the industry.

More than a dozen cannabis companies have filed for creditor protection and major producers like Canopy Growth Corp. and Aurora Cannabis Inc. have written down billions of dollars in inventory and assets. Meanwhile, industry woes accelerated by the COVID-19 pandemic have led to hundreds of layoffs. Even the eagerly-anticipated "Cannabis 2.0" rollout of vapes and edible products was met with early delays and launch stumbles.

Sarugaser expects the supply glut to ease in the coming years as companies that aren't able to produce cannabis in an economically viable manner fade away.

"There are big names that maintain the largest market share that produce negative gross margins quarter-over-quarter. That's simply not a way to run a business," he said.

There have been some notable successes, however, with spending in the legal recreational and medical cannabis market now eclipsing the illicit market, according to recent figures from Statistics Canada. Total sales have risen steadily each month and the Canadian market is currently forecasted to produce annual sales of about $2.8 billion. 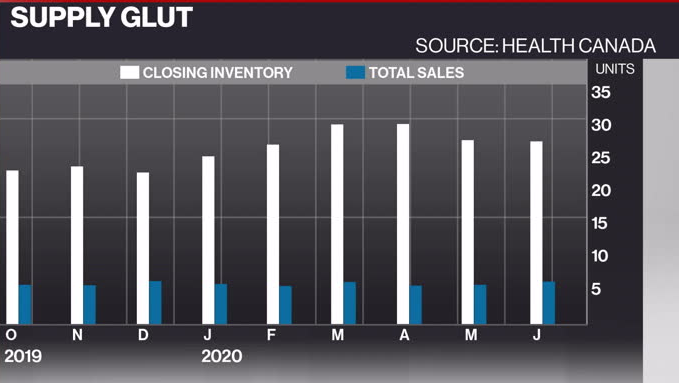 Retail is also turning a corner after a myriad of stumbles in the first year, notably in Ontario. The country's most populous province now counts 200 stores open and is adding 40 new shops a month, while there are more than 1,200 licensed pot shops available nationwide.

Even the illicit market has found itself in the crosshairs of nationwide police investigations that seized hundreds of thousands of cannabis plants over the past year, including a recent bust in August where $42 million worth of illegally-grown pot was captured in Ontario’s Niagara region.

Combating the illicit market has not been an easy task, but some producers are going toe-to-toe with their unregulated counterparts, growing cannabis for less than $1 per gram while others have turned to the great outdoors to produce it for pennies. More than 1,200 acres of land is being used to grow outdoor cannabis this year, more than twice as much as last year, according to Health Canada.

"How else do you beat the black market? You do what they do," Geoff Benic, chief executive officer of Aleafia Health Inc., told BNN Bloomberg as he stood in the middle of the company's property outside of Toronto where 50,000 cannabis plants would soon be harvested.

"You play their game, just with more sophistication."

To prepare for their harvest, Aleafia’s staff was busy earlier this month strategizing over PowerPoint presentations while other workers put the finishing touches on a 35,000-square-foot dry room complete with a customized ventilation system that would soon host some of the company's crop.

Benic allayed concerns that the company was only adding to the existing glut of cannabis in the market, noting that a good chunk of the plants grown at Aleafia's facility contain high levels of cannabidiol (CBD), the non-impairing chemical compound used to treat pain and inflammation. It's part of a bet he made that Canada would soon deregulate CBD for over-the-counter products and eventually allow exports to foreign markets. When that day comes, the company will have plenty of products to meet demand.

"I truly believe that CBD will be no different than what Omega-3 is to eggs," Benic said.

John Fowler, principal of consultancy Blaise Ventures and founder of Supreme Cannabis Co., argues that companies shouldn't be blamed for growing too much cannabis. Instead, he said producers didn't do enough research to understand what products consumers wanted in the first place.

While production doesn't appear to be slowing down, next year should bring some optimism to the beleaguered sector

Raymond James' Sarugaser expects growth to continue in the space, propelled by ongoing cannabis store openings and more familiarity with new products that should hit the market.

"We're starting to see a loosening up of the markets," he said. "We're seeing an opening up of retail, we're seeing the value segment drive top line revenue for the good operators, and then we should see the eventual adoption of Cannabis 2.0 products into 2021."​