Trying to use stock and bond signals to forecast the economy is never easy. With all the wild swings in markets these days, it risks becoming an exercise in the absurd.

Sometimes up, sometimes down, share prices and yield curves are bouncing around so much that discerning a macro message is borderline impossible. Two gains and three drops in the S&P 500 this week left it down 6 per cent on the year, but up 8 per cent from its low. Which message to heed? Bonds are equally indeterminate. The 2-year/10-year yield curve has inverted and un-inverted in the space of two weeks.

“The reality is signals in the marketplace right now have a lot of noise,” said Anik Sen, global head of equities at PineBridge Investments. “When you have a signal that is not particularly clear, that range of outcome is very wide.” 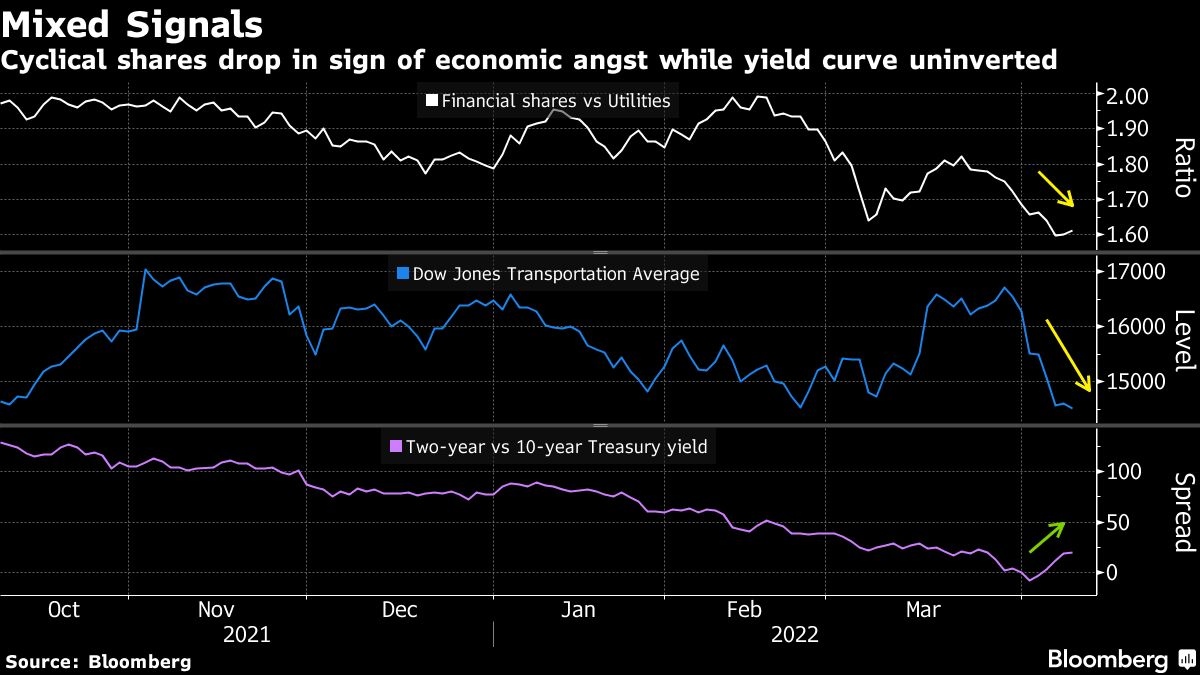 Research from Goldman Sachs Group Inc. suggests trying to discern a recession signal from stocks is generally futile. Mistakes are made, the study found, by people looking for indications that don’t exist. Equity markets behave the same 12 months before an economic downturn as they do any other time, for instance.

That’s bad news for investors who persist in searching for clues to help them navigate an expanding list of known unknowns, from the path of Federal Reserve monetary policy to war in Ukraine. All the uncertainty has prompted Victoria Fernandez and her team to shorten their investment horizon to deal with ever-shifting market narratives.

“The problem right now is we don’t really know what’s going to happen. We don’t know what earnings are going to look like. We don’t know exactly what the Fed’s going to do,” said Fernandez, chief market strategist at Crossmark Global Investments. “Things seem to be changing every day.”

The changes are often drastic. Just consider: in January, bond traders were pricing the Fed’s benchmark rate at no higher than 1 per cent by the end of this year. Now, they’re anticipating it at 2.5 per cent. 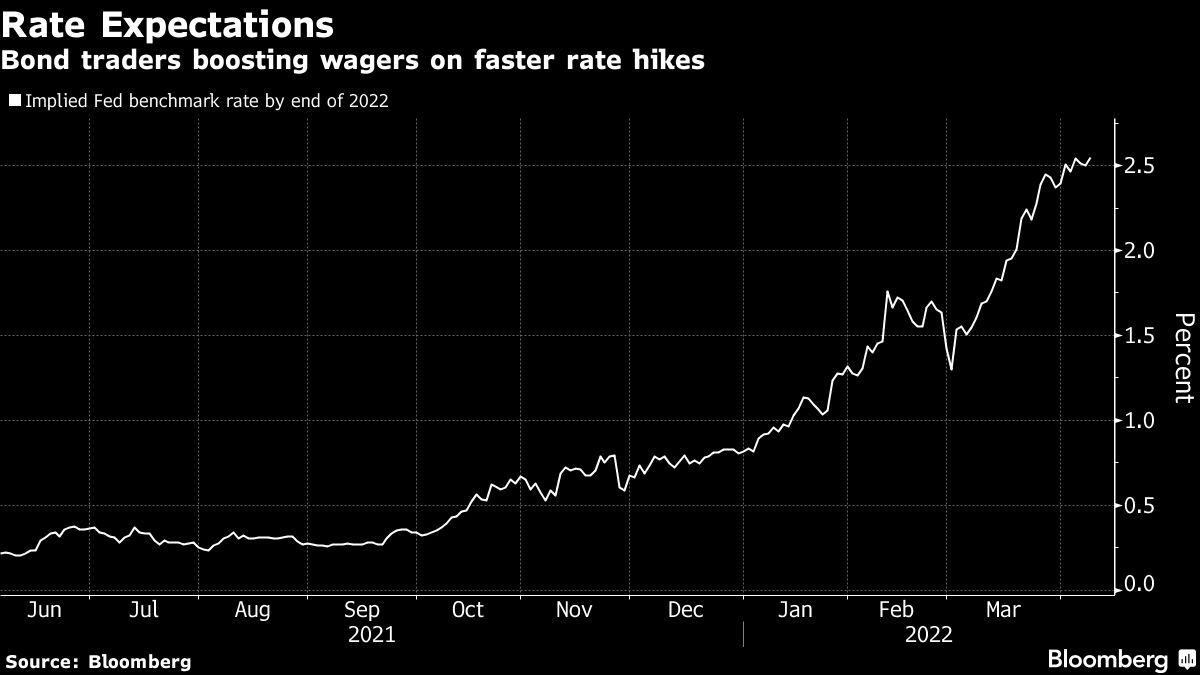 A few months ago, a spike in Treasury yields was viewed as a boost for financial stocks and a damper for utilities. This week, the opposite happened as investors shunned banks and sought safety in dividend-paying companies amid another leg up in rates.

Economically sensitive stocks like shipping companies and semiconductor makers tumbled this week, echoing Wall Street warnings that the risk of a recession is growing with the Fed set to speed up monetary tightening to rein in runaway inflation.

Meanwhile, angst over a serious economic downturn appeared to be subsiding in the bond market. After the yield inversion ignited paranoia last month, the spread between two-year and 10-year Treasury yields has again turned positive.

“It’s too early to position for that full-on recession,” said Zachary Hill, head of portfolio management at Horizon Investments. “But it is time to dial back some risks a little bit.”

While the two-year/10-year curve has inverted ahead of all previous nine recessions, it has not been useful in calling the inflection point. The time from the inversion to recessions has varied a lot -- from seven months to roughly four years, data compiled by Goldman show.

A strategy that bails out of stocks upon the yield inversion would miss out some sizable gains. According to Goldman’s study, stocks have risen in the ensuing 12 months following an inversion in two-thirds of the time since 1965, with the S&P 500 climbing a median 9 per cent over the span.

On the other hand, using the S&P 500’s movement to discern the direction of the economy can be hazardous. Stocks react to all sorts of news, often in an exaggerated manner. Many selloffs can end up as nothing but false alarms. 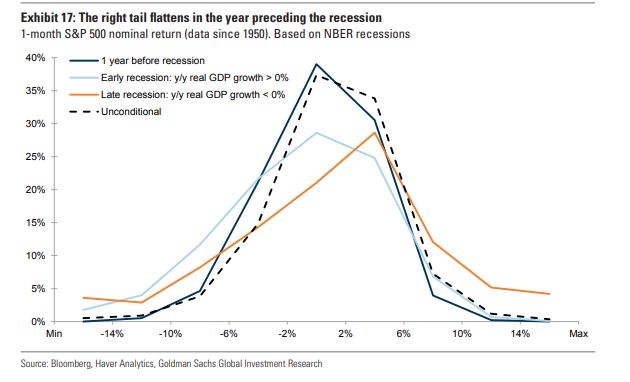 Comparing the S&P 500’s return distribution pattern across various phases of a recession cycle, Goldman found that the market’s performance one year before an economic retrenchment is no different than what it looks at other times. It’s not until the early phase of a recession that stocks tend to show consistent lower returns.

And the markets this year have been particularly difficult to read, given all the sudden reversals in prices. That has left many investors baffled, according to Arthur Hogan, chief market strategist at National Securities Corp.

“That’s why people are saying ‘hey this market is not making sense right now. So we take a step back,’” Hogan said. “The market is acting out of character.”