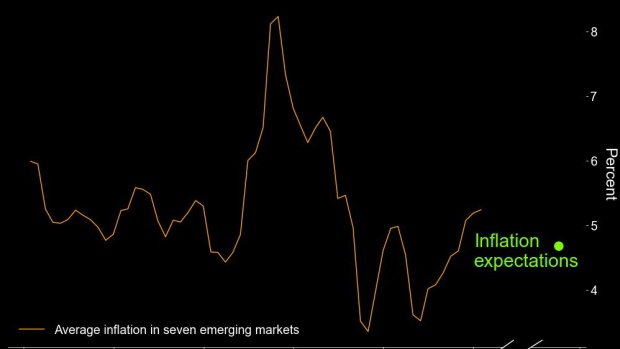 People wearing protective masks walk through a market in Sao Paulo, Brazil, on Thursday, July 30, 2020. Brazil added 69,074 cases on Wednesday, pushing the total number of infections to over 2.55 million, according to the Health Ministry. Photographer: Jonne Roriz/Bloomberg , Bloomberg

(Bloomberg) -- A great era for emerging-market bonds may be only just beginning, according to a study of break-even rates.

After the securities narrowing their yield spread over Group-of-Seven debt by 100 basis points since a 2018 peak, a long-term disinflationary backdrop should see that theme persist for many years to come. Projected inflation for a cross-section of developing nations will average 4.74% from 2026 to 2031, versus an average 5.25% over the past five years, according to the analysis.

“The disinflationary outlook offers a potential capital gain and a stable high income from emerging-market debt,” said Akira Takei, a global fixed-income money manager in Tokyo at Asset Management One Co., which oversees the equivalent of about $510 billion. “The pandemic has yet to subside, so global economies overall see muted inflationary pressure.”

Inflation is a critical component for bond returns, as shown by the slide in global government debt in January as the Biden administration announced it would roll out $1.9 trillion of additional U.S. stimulus. Treasuries have paced the declines, creating the possibility that regions with more subdued price pressures will entice additional inflows.

Local-currency emerging-market debt has dropped 0.4% last month, less than a third of the loss that its G-7 peers incurred.

The U.S. five-year forward five-year inflation swap, which measures expectations for future inflation in the world’s biggest economy, climbed to 2.45% this week from as low as 0.97% during the initial coronavirus selloff in March. The most recent actual consumer-price index reading was 1.4% for December. January data are due next week.

Inflation may also be damped down in developing nations by the expected slower rollout of vaccine distribution, which will increase the prospect that the pandemic will cause long-lasting damage to some of those countries.

Forward break-even rates were derived from five- and 10-year inflation-linked government bonds issued by seven developing nations, except for Mexico where five- and eight-year notes were used. The countries were selected based on being constituents of the Bloomberg Barclays Emerging-Market Local-Currency Government Index. The average was weighted by each country’s nominal gross domestic product.

(Updates with EM and G-7 bond performance in the fifth paragraph.)