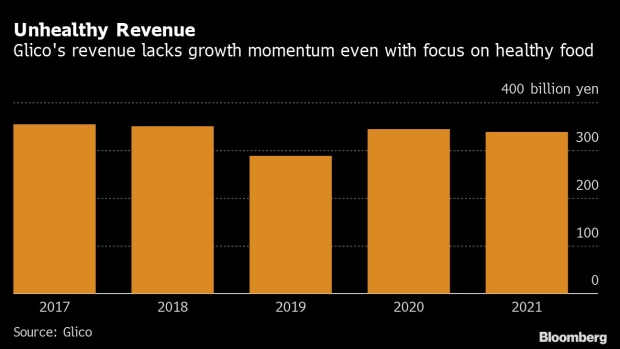 (Bloomberg) -- Junichi Hasegawa has made a career of tackling tough problems, from connecting PlayStation 3 users for online play to researching self-driving cars. Now he wants to invent healthier food ingredients with the help of artificial intelligence.

Personally recruited by Etsuro Ezaki, the 49-year-old great-grandson of Glico’s founder and recently appointed chief executive officer, Hasegawa’s primary job is to help find the perfect blend of taste and nutrition through massive data harvesting and machine learning. He’ll also be instrumental in linking up Glico’s internal research with outside AI firms like PFN to accelerate the development of healthier foods.

It’s the first leadership transition at the company in four decades, and the new CEO’s mantra is that there’ll be no Glico snacks sold that don’t contribute to people’s wellbeing. The company’s shares rose as much as 1.1% in Tokyo on Thursday after falling about 16% over the past year.

“We asked Hasegawa to join not only because he’s a talented engineer, but because he knows the industry, people and subject very well,” Ezaki said. “Machine learning can help people focus on more creative projects. That’s why we decided to actively leverage AI for a wide range of business we do at Glico.”

At PFN from its inception in 2014 to earlier this year, Hasegawa led business and capital alliances with big local companies including Toyota, Eneos, Fanuc Corp. and Chugai Pharmaceutical Co. He expects Glico to similarly grow through collaboration. “Hasegawa mapped out most of our partnership strategy. Without him, we wouldn’t be where we are today,” PFN co-founder and CEO Toru Nishikawa told Bloomberg News.

Glico’s push into high-tech health foods comes as funding dwindles for startups developing alternative foods and agritech this year. But Glico and Hasegawa are banking on continued demand for healthier eating that will help them tap into a projected $1 trillion industry by developing personalized nutrition plans, automated ovens that bake the perfect Bisco biscuit and new bacteria strains to improve gut health.

“Glico’s laboratory owns more than 10,000 types of strains,” Hasegawa said in an interview in Tokyo. Among them, the company’s BifiX is a type of bacteria that’s effective when combined with dietary fiber and used in some yogurt products. To make Pocky sticks and the rest of the company’s offerings healthier, Glico will need the power of AI. “This kind of research and experimentation by humans takes a long time, but AI can speed up the process.”

Celebrating its centenary this year, Glico’s first products in 1922 were candies packed with glycogen from oyster broth, which the founder credited for his son’s recovery from typhus. Glico’s image of itself as a supporter of people’s nutrition and health has fallen by the wayside to be replaced by one of a peddler of indulgent snacks.

“A snack that just tastes good has no future as consumer behavior changes,” Hasegawa said. “People increasingly eat for their health because that’s ultimately what counts.”

Compatriot food maker Ajinomoto Co. is trialling an AI-powered diet recommendation app for athletes, and Glico similarly wants to tailor its services to customers. Ultimately, the company would like to offer a subscription-based personalized nutrition service.

The use of AI in the food industry is still rare, because the typical low-margin, high-volume model does not allow big investments, University of Tokyo professor Yutaka Matsuo said. “Hasegawa moving to the industry is positive news for both the sector and AI, as others are sure to follow if this becomes a success.”

Hasegawa also pointed to cost as the primary barrier to AI’s deployment in food development, but he sees partnerships with the likes of PFN as a way to spread the cost and he’s been given a good budget by the Glico CEO, he said without specifying numbers.

Still, Glico is likely to face an uphill climb convincing investors that its growth strategy is correct. Analysts are skeptical in part because Glico’s push toward healthy and functional food has been underway for several years and has yet to bear fruit.

“Glico slashed its product range to focus on healthy food, which resulted in lost opportunity,” Okasan Securities analyst Manabu Sumoge said. “People may want less guilt when snacking, and cutting out some sugar may help, but I’m not sure they want to become healthy by eating snacks.”

The health food strategy will take time to prove itself and, even if it does, competition will be fierce as rivals are also looking at the sector, Sumoge said. The market would react more favorably to Glico strengthening established products like Pocky and Bisco and expanding them to more consumers overseas, he added.

Hasegawa has no doubts about Ezaki’s vision, however. He sees a lack of consumer awareness about Glico’s healthier products -- such as its Sunao low-carb ice cream, a favorite of his daughter which she didn’t realize was made by Glico until he joined the company.

“That’s the only ice cream she eats now, and the future will bring more consumers like her, who will pay extra for snacks that are good for them,” Hasegawa said.