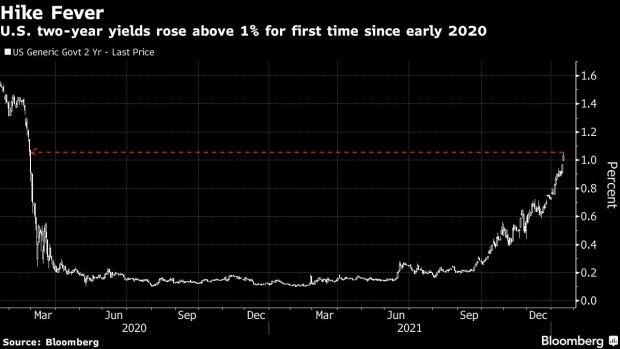 (Bloomberg) -- One of Asia Pacific’s best-performing bond funds is echoing billionaire investor Bill Ackman by saying the Federal Reserve has fallen behind in fighting inflation and may have to raise interest rates by half a percentage point in March.

“The fact that they went on for so long with the transitory inflation narrative really hurt their credibility and I think they do need to catch up in terms of being ahead of the curve,” said Omar Slim, a money manager at PineBridge Investments in Singapore. For that reason, “a 50 basis-point hike is not off the table” in March, he said.

Investors have been adding to bets over recent weeks on how quickly the Fed will raise rates to combat elevated inflation. Swap markets are currently pricing in four 25 basis-point hikes within a year, with the first expected in March.

Fed officials “are potentially trying to prepare the market for a more aggressive hiking path,” Slim said in a Bloomberg Television interview. “The market is starting to factor that in, and the Fed is essentially not trying to do anything to dampen these expectations.”

Slim helps manage the PineBridge Asia Pacific Investment Grade Bond Fund, which has beaten 93% of its peers over the past three years. U.S. 10-year yields may climb to a 2%-to-2.25% range this year if the Fed does decide to hike by 50 basis points in March, he said.