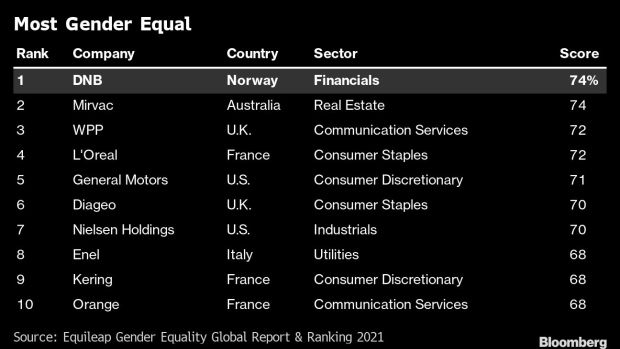 (Bloomberg) -- One of Europe’s best capitalized and top performing banks was also just named the world’s most gender diverse corporation.

DNB ASA, Norway’s biggest bank, achieved the highest score for equality between the sexes of all corporations in the Equileap Gender Equality Global Report & Ranking of 2021, published this month.

DNB’s chief executive, Kjerstin Braathen, says the key to success is making sure women aren’t disadvantaged when they have children. And the best way to do that is to provide adequate paid parental leave.

“It is absolutely possible to have children and a successful career,” she told Bloomberg. “A modern organization should facilitate programs to make this smoother and attractive.”

At DNB, the goal is to have at least 40% of the bank’s top four layers of management held by women. “We’re nearly there,” Braathen said.

She says quotas, which Norway enforces at the board level, are a “useful tool.” But ideally, “boards should see the value of diverse teams without strict quotas.”

“We have come a long way in terms of gender diversity in DNB,” she said. “We still have a way to go on other aspects of diversity, and are pushing towards more diverse teams across the bank.”

Investors in DNB have seen the value of their holding double over the past decade, while the Bloomberg index of European bank stocks is down about 40% over the same period.

Yet even in Norway, one of the richest and most gender equal places in the world, real parity between men and women doesn’t exist. Norway’s Prime Minister Erna Solberg, the host of this year’s SHE conference in Oslo, says that despite equal access to education, Norwegian girls tend to opt for degrees that put them in lower-paid public-sector jobs. Norway is still struggling to figure out how to right this imbalance, Solberg said on Friday.

But Norway is ahead of many other parts of the world, where the pandemic has exacerbated inequality.According to the European Commission, not a single country is on track to achieve gender equality by 2030. In a November report, the commission estimated that the rate of joblessness among women due to the pandemic is 1.8 times higher than among men, resulting in a 9.1% spike in the female poverty rate.

Solberg says global recovery plans need to respond to what’s come to be known as the shecession, the word being used to describe the recession that’s hit women even harder than men.

“We need a gender focus also in our recovery plans,” Solberg said. “We do have to solve the environment and climate crisis, but we also have to do a gender evaluation.”