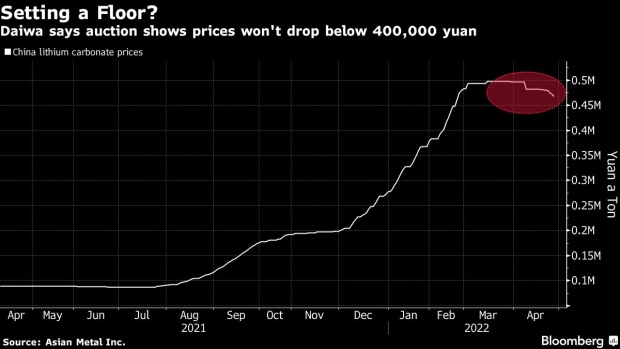 (Bloomberg) -- The highest bid for lithium at an online sale surged by 140% in just six months, an indication the stampede for supplies of the main ingredient used in electric vehicle batteries could get even more intense.

Pilbara Minerals Ltd.’s auction of spodumene concentrate -- a partly-processed form of lithium -- attracted a top bid of $5,650 a ton on Wednesday for a cargo of 5,000 tons. That compares with $2,350 at the previous sale in late October on the Australian miner’s Battery Metal Exchange.

“The pricing received on the BMX sales trading platform is indicative of the critical shortage that exists in respect of lithium raw material supply,” Pilbara Minerals said in a statement. It’s the company’s fourth online spodumene sale.

The jump in the auction bid is roughly in line with the increase in lithium carbonate -- a chemical used in battery production -- in China. It started rising in the middle of last year as the global recovery from the pandemic coincided with a surge in EV demand.

The rally has lost momentum in recent weeks -- prices are currently at 467,500 yuan ($71,182) a ton, according to Asian Metal Inc. -- as the worsening virus outbreaks upended supply chains and clouded the consumption outlook. The auction result suggests Chinese lithium compound prices are unlikely to drop below 400,000 yuan a ton, Daiwa Capital Markets’ analysts Dennis Ip and Leo Ho said in a note.

Miners are cranking up production to meet the skyrocketing demand and also enjoying bumper profits. Chinese producer Ganfeng Lithium Co. reported a more than 600% jump in first-quarter net income from a year earlier, while Pilbara’s share price rose as much as 6.5% on Wednesday.

The Perth-based miner said it plans to hold the auctions more frequently as it ramps up production at its Ngungaju mine in Western Australia. However, it also warned that virus-related labor disruptions may result in output being in the lower half of the 340,000-380,000 ton guidance for the year through June.