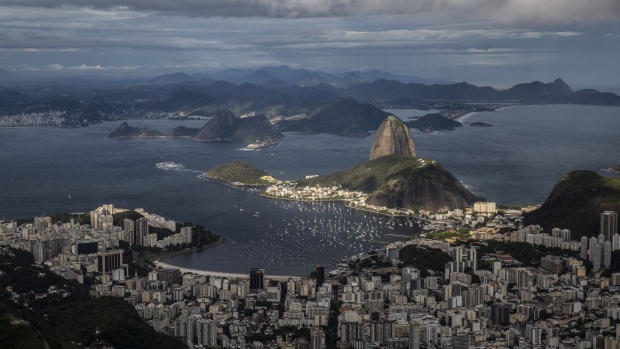 The view from the mountain where the Christ the Redeemer statue is located during its 90th anniversary in Rio de Janeiro, Brazil, on Tuesday, Oct. 12, 2021. Elected one of the seven wonders of the modern world, the statue celebrates its 90th anniversary as Brazil's most famous landmark. , Bloomberg

(Bloomberg) -- Brazil’s main hedge funds are kicking off the year playing it safe, limiting bets on domestic markets as they brace for election jitters and global shift in monetary policy.

Legacy Capital, which expects Brazil’s economy to contract 1% this year, says a deteriorated macro scenario and prospects for turmoil around the October presidential vote justify smaller bets in the country. Its main fund boosted positions in equities abroad in the last two weeks of December.

At the same time, expectations that global liquidity will dry up have increased, as analysts now see the Federal Reserve beginning to lift rates as early as March. The main risk for markets in the coming years comes from developed economies quickly removing stimulus policies, said Rogerio Xavier, co-founder of SPX Capital, whose SPX Nimitz Feeder fund posted a 11.71% gain for 2021, its biggest annual surge since 2017.

Not all funds fared so well, with several of the more renowned firms delivering returns that fell short of the CDI benchmark rate used by the industry. Verde Asset Management’s flagship fund saw the second annual drop in its more than two-decade history. The fund said it was hurt by bets on the local stock market, which overshadowed gains with cryptocurrencies and Brazil rates.

China should adopt policies that are supportive to economic growth in 2022, while the U.S. heads toward monetary policy normalization. Fund remains confident in investment opportunities for the year and expects U.S. growth to remain strong.

Brazil’s move to bring monetary policy to significantly restrictive territory and ongoing fiscal pressures have been keeping a high risk premium across local assets. But while the price incentive looks “adequate” for many assets, the macro and technical factors continue to demand above-usual caution.

A challenging scenario in Brazil over the next few months and high level of uncertainty are expected ahead of the October vote. Recent improvement in the country’s labor market is likely temporary and unemployment should resume its upward trend. Fund boosted long positions in global stocks.

Current data suggest that Brazil’s recession deepened in the fourth quarter and fund now expects the nation’s GDP to shrink 1% in 2022, with risks tilted to an even greater decline. Legacy maintained a lower exposure to local assets given prospects of a worsening in macro scenario and election turmoil.

As fiscal and monetary stimulus are reversed, some asset bubbles that were created across the globe in the past years are likely to burst. Fund has short positions in mining companies and fintechs in the local stock market. Also says former president Luiz Inacio Lula da Silva has an advantage in the October election race.

Verde’s flagship fund gained with Brazil rates and crypto bets in 2021, but that wasn’t enough to offset losses stemming from its local stock exposure. Portfolio currently has about 27.5% in stocks, mostly in Brazil; also has small long positions in the Russian ruble and oil.