Canada’s largest private-sector union is trying to capitalize on a shortage of workers and high inflation to win bigger wage increases and grow its membership.

Unifor, which represents 315,000 workers in more than 20 sectors, has about 400 collective agreements to be concluded this year. It wants to attract new members in growing industries like warehousing and electric vehicles, according to the union’s new president.

Average wages in Canada are rising at more than 5 per cent  a year, but workers’ purchasing power is still declining because of the highest inflation since the early 1980s. That issue is front and center in negotiations for unionized workers, Unifor President Lana Payne said.

“Inflation is top of mind and has spilled over into every collective bargaining table we have right now,” Payne, who became the first woman elected to the top job this month, said in an interview. “In some sectors, we’re getting historic collective agreements.”

Her tough talk is a worrying sign for central bankers trying to stave off a wage-price spiral. Labor unions around the world are flexing their muscle, pushing hard for pay increases amid rising costs of living.

Among recent major wins, Unifor secured a 25 per cent  wage increase over four years for some classifications of casino workers, after an eight-day strike. Cleaning service providers won a 19 per cent  pay hike over the same period.

The largest public-sector union, meanwhile, is demanding a 4.5 per cent  pay increase per year in talks with Prime Minister Justin Trudeau’s government that have hit an impasse. So far this year, annual increases in major union wage settlements are averaging 3 per cent , according to employment ministry data. 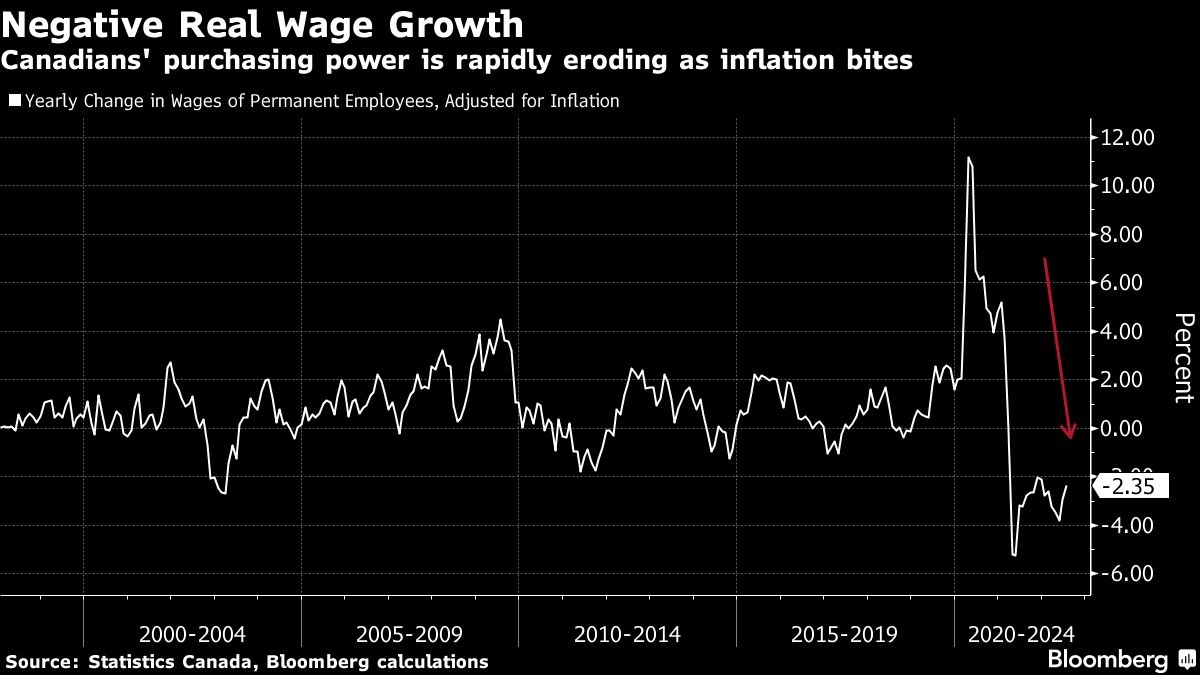 Inflation, however, is still outpacing many of those pay increases. While annual consumer price gains slowed to 7.6 per cent  in July, inflationary pressures remain broad and continue to exceed the average year-over-year increase in hourly wages of 5.2 per cent , according to Statistics Canada.

The Bank of Canada is in the midst of an aggressive series of interest-rate hikes to bring price pressures to heel and ensure expectations don’t become entrenched. When it increased borrowing costs by a full percentage point last month, it included a new risk scenario for a wage-price spiral in the accompanying monetary policy report.

Those comments rankled Payne and other labor leaders, who see the inflation crisis as an opportunity to grow their membership and expand union coverage. Canada’s unionization rate is currently about 27 per cent , compared to 10 per cent  in the US and 24 per cent  in the UK.

“Workers are being attracted to unions again, partly because of the moment that we’re in and really needing to have clout in their workplace to make sure that they’re getting a decent income,” Payne said.

Unifor is also trying to institute the cost-of-living-adjustment clauses into agreements, which would allow wages to increase as inflation rises, Payne said. The loss of those automatic adjustment requirements in contracts over the past few decades “almost coincided with real wage growth lagging behind for the majority of Canadian workers.”

Although a tight labor market with record high vacancies is helping in negotiations with businesses trying to retain workers, there have already been 14 work stoppages so far this year. A similar trend was observed in 2021, when Unifor had a record number of strikes or lockouts.

“There’s a real understanding that if you want to retain workers, you have to pay for it,” Payne said. “But we’re not saying this is easy because we’ve also had more disputes now than at any point. It really shows that workers are willing to fight back at the collective bargaining table.”

Payne’s predecessor, Jerry Dias, retired suddenly in March after eight years at Unifor’s helm, citing health issues. The next day, the union disclosed he was under investigation amid accusations he accepted money from a Covid-19 test producer in exchange for promoting the kits to employers.