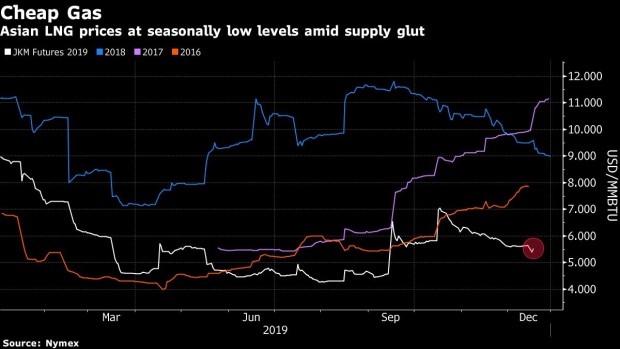 (Bloomberg) -- One of China’s top liquefied natural gas buyers offered to sell a cargo on the cheap -- and in the throes of winter -- a fresh sign of the massive oversupply that has weighed on the market.

Chinese companies stocked up on LNG for the heating season, but warmer temperatures have curbed demand at the same time supply is ramping up at new projects. Prices in North Asia are more than 40% lower than they were a year ago, and none of China’s major buyers are currently seeking prompt deliveries for the winter, according to traders surveyed by Bloomberg.

PetroChina offered the February cargo at a 8.594% slope to Brent oil, beating out three other firms. Pakistan, which doesn’t always award its tenders, will notify PetroChina of its decision by Dec. 30.

This is at least the second time PetroChina has offered the cheapest price in a Pakistan tender. The company, which has traditionally been a buyer but has trading ambitions, was the lowest bidder on a Nov. 30 delivery cargo, which Pakistan ultimately chose not to purchase.