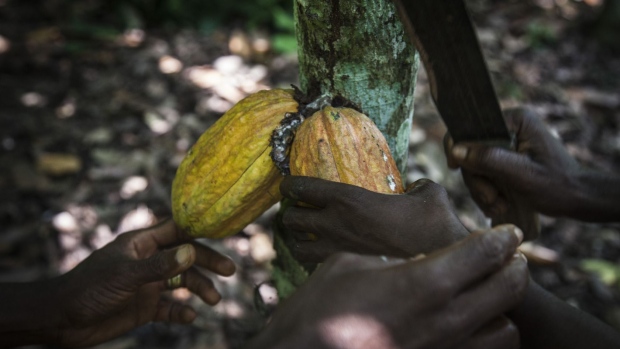 (Bloomberg) -- The world’s biggest cocoa grower plans to trace beans from farms to ports as it seeks to protect forests and root out illegal plantations.

Ivory Coast will soon conduct a feasibility study for the plan, with the view to establish a traceability system for cocoa from December next year, industry regulator Le Conseil du Cafe-Cacao said in a document handed to reporters Wednesday.

The West African country, which accounts for almost two-fifths of global cocoa output, is under pressure from chocolate manufacturers and donors to stamp out production in protected areas. The nation had 16 million hectares (40 million acres) of forests in 1960, but this had fallen to 3 million hectares in 2018, with farmers producing as much as 500,000 tons of cocoa per season in protected areas, or about a quarter of its annual production.

The government and companies agreed on “the final goal of achieving full traceability, from planting to the first point of purchase at a national level,” according to the CCC’s document.

Ivory Coast and neighboring Ghana, the second-biggest grower, said Wednesday in a separate announcement that they established a joint committee with cocoa buyers, processors and chocolate makers to root out social ills, from the prevalence of child labor to deforestation, that are plaguing the industry.

“We will show to the world that we can produce clean cocoa,” said CCC Managing Director Yves Kone.

The joint announcement marks another step by the two biggest growers to cooperate more closely and seek common strategies to attain their goals. The countries decided in July to jointly implement a premium of $400 per ton for their cocoa to increase the pay of farmers.

To contact the editors responsible for this story: Andre Janse van Vuuren at ajansevanvuu@bloomberg.net, Liezel Hill