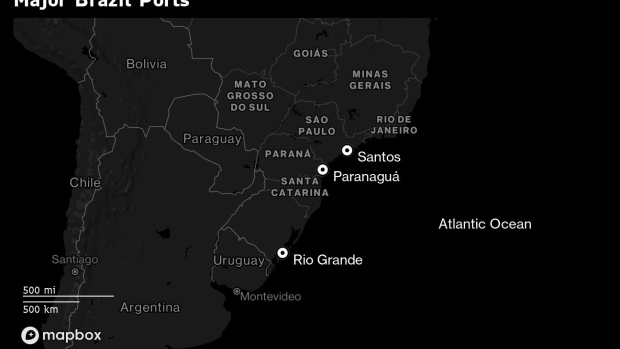 The Port of Santos in Santos, Brazil. , Bloomberg

(Bloomberg) -- Supply Lines is a daily newsletter that tracks trade and supply chains disrupted by the pandemic. Sign up here.

As Brazil contends with its worst drought in almost 100 years, its ports and their regulator are intensifying efforts to quantify the risks of climate change for the nation’s sea hubs.

The National Agency for Waterway Transportation and the German Corporation for International Cooperation are compiling rankings of risks ranging from gales to rising sea levels at 21 key Brazilian ports and will release the first phase of findings next month. The maritime operations of Latin America’s largest economy are the world’s biggest handlers of coffee, soybeans and sugar.

“The lack of data is the main difficulty in understanding the vulnerability Brazilian port regions face,” Alessandro Max Bearzi, an environmental-regulation specialist at the agency known as Antaq, said in an interview.

A second study phase will look at whether the threats are becoming more frequent and how that may pan out in the future.

South America’s waterways haven’t been spared from the adverse weather that’s hit other regions globally. Rivers in the northern Amazon area are registering record-high levels, while further down the continent they’re becoming shallower due to the drought, making it difficult to transport commodities to ports and even to generate power.

Brazil’s coastal ports have also faced weather challenges, including cyclones, but are growing trade as demand for the nation’s commodities keeps climbing.

Antaq estimates that the country’s more than 200 maritime hubs will increase shipments by 4% this year, surpassing 1.2 billion tons, which would be an all-time high.

The port of Santos -- Latin America’s biggest -- keeps setting new shipment records, and is one of three ports the regulator has chosen for the second phase of its study.

While Santos hasn’t experienced any climate-related setbacks, it’s working with the regulator and gathering data to evaluate the effects of adverse weather, said Thiago Menezes, an environmental supervisor at the Santos Port Authority. “We understand it’s important to learn more,” he said.

A separate assessment involving researchers from King’s College London and Brazil’s Natural Disaster Surveillance and Early Warning Center estimated that Santos’s sea levels could climb by as many as 45 centimeters (18 inches) by 2100, and the city could face cumulative damage of as much as $467 million by then, the 2017 study found.

“The economic costs could be three times higher,” climatologist Jose Marengo, who was the project’s lead researcher in Brazil, said in an interview. “Some say we were too conservative. Our estimates were only based on property values.”

As a consequence of the project, the city of Santos has created a plan to address climate change and another to tackle rising sea levels, Marengo said.

The port of Santos, located on the city’s outskirts, is more geographically protected than the urban center, and is therefore less exposed to storms and riptides, according to Menezes.

At the port of Paranagua, Brazil’s second-busiest, the administration faced a wake-up call after an unprecedented subtropical cyclone hit the port in 2020, said Thales Trevisan, the port’s environmental manager.

“These kinds of cyclones are unfamiliar in the region -- it was unexpected,” Trevisan said about the event’s impact on the port located 260 miles south of Santos. In response, it has installed a live meteorological station that allows operators to react rapidly and more effectively to extreme weather events such as increased wind speeds and storms, Trevisan added.

“If another cyclone came, we’d know to shut down operations right away,” he said in an interview.

Every day it remains closed, the port that moved 52.1 million tons in 2020 loses some $192,000, so preparing for possible changes in the climate landscape is key, Trevisan said.

Brazil’s southernmost port of Rio Grande, the largest soybean exporter after Santos, is also in the second phase of Antaq study. Officials in the state of Rio Grande do Sul, where it’s located, want a clearer perspective of how an increase in extreme events like winds and storms will play out in the long run, said Henrique Ilha, who overseas environmental initiatives at the state-level maritime authority.

“Our coast is prone to great-magnitude events, but in the past three or four years we’ve had events that went beyond that and affected the coastline in a way that it didn’t return to what it looked like,” he said. “We need a more ample data interval to confirm whether this is a problem.”

To address these vulnerabilities and gaps, the port partnered with SiMCosta, a Rio Grande-based monitoring project whose researchers have installed weather buoys throughout Brazil’s coast since 2014 to provide meteorological and oceanographic measurements to local ports.

Decades of data are needed to understand the impact of climate change on the ports, but “Brazil doesn’t have decades,” said Carlos Alberto Garcia, SiMCosta’s founder.

Natalia Pereira, whose company provides meteorological monitoring for private terminals in Rio Grande, said wind speeds in the region have increased by 10% over the past two years.

“We’re noticing changes,” said Pereira, chief executive officer at Catavento Meteorologia. “They’re no longer forecasts. In 50 years, the ports will be noticing these changes too.”