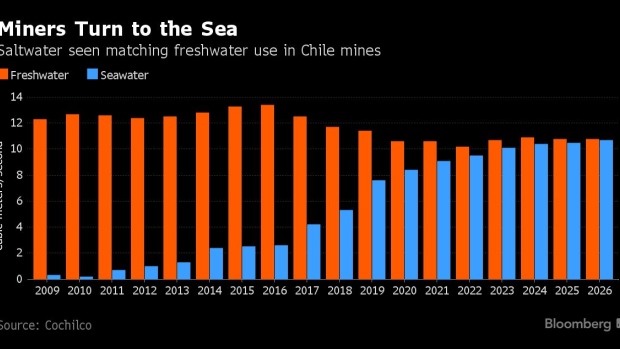 (Bloomberg) -- Authorities in Chile are cracking down on water use by mines in the driest desert on earth, threatening future supply in the top copper-producing nation.

On Friday, Chile’s environmental agency SMA charged BHP Group’s Escondida for allegedly drawing more water than allowed for almost 15 years in a move that could result in the loss of its permit, closure or a fine. Just to the south, state-owned Codelco has suspended a planned expansion of its Salvador mine until it can resolve a suit filed by the State Defense Council against the project’s proposed use of water.

Mines that dot the parched Atacama desert are coming under increasing scrutiny for their use of water, with lithium giant Soc. Quimica & Minera de Chile SA facing a Supreme Court ruling after community complaints. Even in central Chile, scare water supplies have restricted output at Anglo American Plc’s Los Bronces mine and Codelco’s El Teniente.

At Escondida, the regulator is accusing the world’s biggest copper mine of a serious decline in the water table, alleging the operation failed to lower extraction at four control points since 2005 and reached triple the acceptable threshold in 2019.

BHP has 10 days to present a compliance program in response to the charge. The company didn’t immediately respond to a request for comment on the allegation.

While closing Escondida doesn’t seem likely, it may have to run at a lower rate, said Bloomberg Intelligence analyst Andrew Cosgrove.

The suit against Salvador’s expansion also threatens future supply given the project is needed to replenish falling ore grades at Codelco’s smallest and least profitable operation.