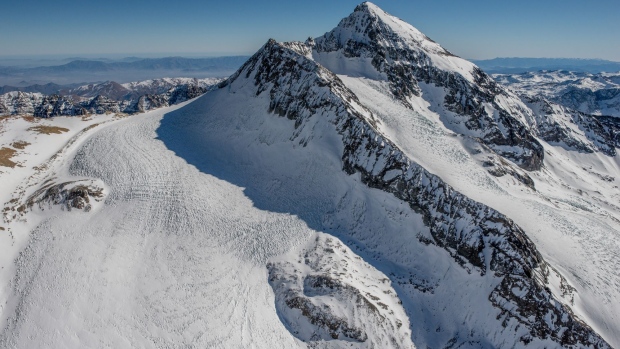 The Olivares Alfa glacier sits in the Andes Mountains in an aerial photograph taken near Santiago, Chile, on Friday, July 5, 2019. Chile has one of the world's largest reserves of fresh water outside the north and south poles, but the abundant glaciers that are the source of the precious commodity are melting fast. Photographer: Tomas Munita/Bloomberg , Bloomberg

(Bloomberg) -- Chile’s government seeks to strike a balance between protecting glaciers and appeasing investors in the top copper producer -- even as the political opposition pushes a law that could constrain mining in such environmentally fragile areas.

“We are in favor of protecting the environment including water reserves and glaciers, but we have to do it correctly,” Chile’s Environment Minister Carolina Schmidt told the Pauta Bloomberg radio show on Thursday. “We have many scientists and data that show us glacial protection can be done correctly.”

The government of the South American nation and the mining industry say that huge copper deposits high up in the Andes Mountains can be tapped without destroying the glaciers that provide water for millions of people. Those glaciers are already receding thanks to global warming. Chile is grappling with challenges governments worldwide face with growing pressure to curb environmental impacts while trying to generate revenue to prop up the economy amid a pandemic.

Proposed reforms to Chile’s water code should safeguard the resource in the country while providing certainty to companies that invest in key industries including agriculture, which has been hit by a years-long drought, Schmidt said. Critics of the existing code say it doesn’t explicitly protect human consumption.

An opposition-led bill being debated in a Senate mining and energy commission would provide blanket protections for the country’s glaciers and permafrost areas, though such a law threatens to restrict mining operations and prohibit some development projects. Two divisions of state-owned Codelco and Anglo American Plc’s Los Bronces mine could be affected by the proposed bill, which was introduced to the Senate in July 2018.

Chile’s government is also promoting the use of hydrogen and renewable energy in mining operations as a way of reaching carbon neutrality and delivering “green” copper that would fetch a premium, Schmidt said.