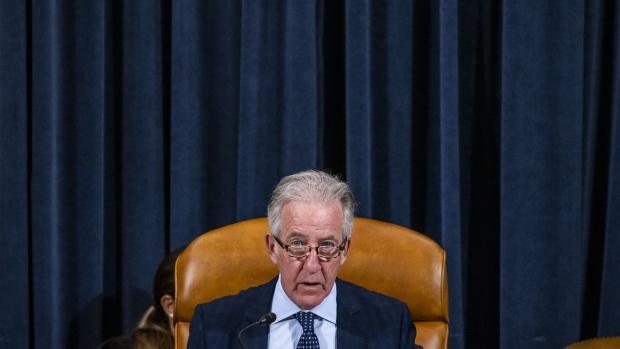 Representative Richard Neal, a Democrat from Massachusetts and chairman of the House Ways and Means Committee, speaks during a markup of the Build Back Better Act in Washington, D.C., U.S., on Thursday, Sept. 9, 2021. Lawmakers are attempting to craft one of the most complex tax and spending bills ever contemplated, with virtually no area of the budget or tax code left untouched, during just a handful of work days this month. Photographer: Samuel Corum/Bloomberg , Bloomberg

“There were enough that raised questions about it,” House Ways and Means Chairman Richard Neal told reporters following a third day of committee sessions to advance parts of the Democrats’ economic and social-spending proposals. “The issue here is very simple and the arithmetic here is very defiant. And that is getting to 218 votes,” he said, referring to the number amounting to a majority in the House.

Neal, a Massachusetts Democrat, plans to wrap up the committee’s debate of tax policies and other provisions within its jurisdiction Wednesday.

Biden’s proposal to end a tax break on inheritances known as “step-up in basis,” which wipes out the capital gains tax on assets when the owner dies, was already facing obstacles even before the House committee left the provision out of its draft tax legislation released Monday.

The plan had been central to Biden’s efforts to overhaul capital gains taxes as part of a broader effort among progressives to equalize treatment of employment income with investment income, and achieve a top capital gains rate of 39.6% before a surtax on top earners.

The House committee instead proposed raising to raise the top long-term capital gains rate to 25% from 20%. The House Democratic leadership could still insert changes after the committee passes its draft and before the entire chamber votes on the legislation. Yet Neal’s exclusion of the measure from his own committee’s proposal, along with his latest remarks, indicate a last-minute addition of the capital gains overhaul is highly unlikely.

“I heard from a lot of constituents about step-up-in-basis,” Virginia Representative Don Beyer, a Democrat on the committee, told reporters during a brief break from debate on the bill.