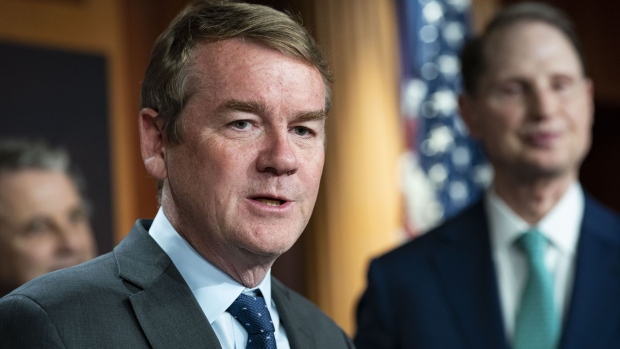 Senator Joe Manchin, a Democrat from West Virginia, talks on a cellphone at the U.S. Capitol in Washington, D.C., U.S., on Wednesday, Jan. 19, 2022. Senate Democrats edged closer to handing the White House another defeat as the chamber took up voting-rights legislation with extraordinarily long odds in the evenly divided chamber. , Bloomberg

(Bloomberg) -- A group of Senate Democrats is lobbying President Joe Biden to keep the expanded monthly child tax credit payment as the “centerpiece” of any revived tax and spending agenda despite the president’s suggestion it may need to be dropped.

The senators, led by Michael Bennet of Colorado, said in a letter to Biden on Wednesday that the now-expired tax credit was a “signature domestic policy achievement of this administration” and and that it kept 3.7 million children out of poverty in December alone.

“Without the expanded credit, nearly 10 million children will be thrown back into or deeper into poverty this winter, increasing the monthly child poverty rate from roughly 12% to at least 17%,” the senators wrote. “Raising taxes on working families is the last thing we should do during a pandemic.”

Along with Bennet, the letter was signed by Finance Committee Chairman Ron Wyden of Oregon and Banking Chairman Sherrod Brown of Ohio. Also signing were Senators Cory Booker of New Jersey and Raphael Warnock of Georgia, whose 2020 election handed Democrats their narrow Senate majority.

Their plea is another sign that Democrats still have a way to go to finding agreement on a new version of Biden’s economic agenda that can secure 50 votes in the evenly divided chamber. With the plan stalled, Biden last week conceded that he might not be able to get an expanded child tax credit in the package, as well as several other priorities.

Senator Joe Manchin of West Virginia, whose vote is needed to pass the bill, has balked at supporting the legislation that was being negotiated with the White House. He wants the child tax credit benefit to be tied to work requirements and wants it extended over a decade rather than just for another year to show its true cost. He also has said he’s concerned about pumping more money into the economy when inflation is rising and wants to cut the overall price tag of the bill.

Manchin has said that a decade-long credit costing $1.4 trillion would leave little room for other priorities in a bill he has previously sought to cap at $1.5 trillion.

Bennet said in an interview last week he is open to lowering the income cap for high earners receiving some of the credits from $400,000 per couple, but does not want to stop the payments to those without taxable income.

Last year’s pandemic relief bill expanded the child tax credit to an up to $300 per month per child credit with advance monthly payments. That has now expired and the last payments went out in December.

Senate Democrats hope to return to talks next week on the stalled Biden economic agenda after more than a month hiatus because of recesses and a failed attempt to pass a voting rights bill.