Don't expect a Bank of Canada hike until at least October: Economist

With a week to go before the Bank of Canada's next policy meeting, the odds are stacked in favour of rates going up in this country. But some skeptics argue the central bank should hold fire.

"I do recognize that [Bank of Canada Governor] Stephen Poloz is leaning toward a rate hike, but there's still a lot of things that can happen between now and the rate decision, particularly when it comes to geopolitics," said Stéfane Marion, National Bank's chief economist and strategist, in an interview with BNN Bloomberg on Tuesday.

"I think this is one of the rare instances where you could argue that given this uncertainty out there, why would you proceed with a rate hike if things turn from bad to worse later this summer?"

The implied probability that the Bank of Canada will raise its benchmark lending rate to 1.5 per cent on July 11 has surged recently. Indeed, as of Wednesday morning the market perceived an 81.6 per cent chance that the bank will boost the cost of borrowing at its next meeting. 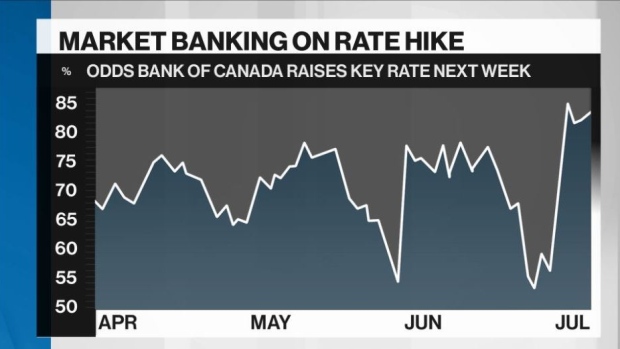 Those odds were barely above 50 per cent a week ago; but market conviction became stronger after Poloz indicated last Wednesday he won't be swayed by fiery trade rhetoric.

Since Poloz’s comments, the only major data released by Statistics Canada showed the country's economic growth slowed to 0.1 per cent in April. While that was a deceleration from March, it was narrowly ahead of estimates.

Marion also said Poloz isn't helping matters with his recently professed desire to make sure all Canadians understand what the central bank is doing.

"Not everyone has the same level of interest or familiarity with economics," Poloz said in his June 27 speech. "The father rushing to pick up the kids and get dinner on the table before soccer practices is not as focused on our interest rate announcements as, say, a bond trader on Bay Street."

That struck a nerve with Marion.

"To be honest, I'm a bit baffled by this strategy because when you keep in mind that more than 40 per cent of Government of Canada debt is held by foreigners, these are not soccer dads," he said.

"We've seen some of our clients asking, 'What is a soccer dad?' A lot of these guys are based in other countries. My point is, there's a limit to how simplistic you want your message to be."

What should the Bank of Canada do at its July 11 meeting?