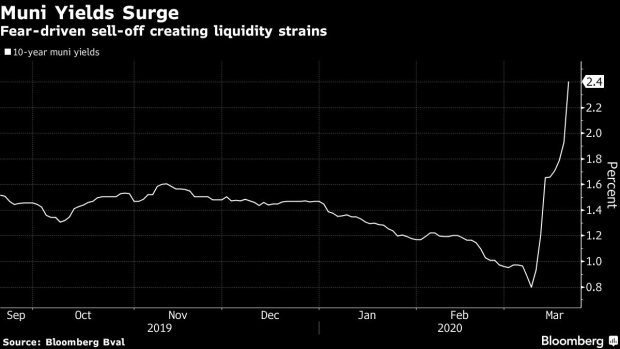 (Bloomberg) -- The chairwoman of the House Financial Services Committee is proposing that the Federal Reserve take the unusual step of supporting debt markets for state and local governments, which are on the front lines in the battle against the coronavirus.

California Democrat Maxine Waters asked Democratic colleagues to back legislation that would require the Fed “to support state, territory, and local debt issuance,” according to a letter dated March 18.

This month the municipal-bond market has gone through its worst rout in modern history.

The securities are headed for a 5.6% drop so far in March, the worst month of performance since 1984, according to Bloomberg Barclays indexes. Yields on top-rated municipal bonds have seen a massive move higher since just March 9, with 30-year yields increasing over 1.5 percentage points to about 2.9% on Thursday afternoon.

“If the Fed provided this low-cost financing, it would instantly give hundreds of different governments across the country the financial ability to put their epidemic-fighting efforts into high gear, funding everything from new medical facilities, protective gear for health-care workers, measures to ensure continuation of key public services and support for social distancing,” Marcus Stanley, director of Americans for Financial Reform wrote in a Bloomberg Opinion column Thursday.

But such action may require a modification of the Federal Reserve Act if the Fed used open-market operations to stabilize the market and buy the debt outright. That would also constitute a form of quantitative easing, adding to the Fed’s at least $700 billion of purchases in Treasuries and agency-backed mortgage debt that the central bank announced in an emergency move Sunday.

If the Fed launched a new special purpose facility to support the muni market, it would also require authorization by Treasury Secretary Steven Mnuchin.

Normally the Fed is averse to transacting in anything but the highest rated debt to avoid credit risk. There are also thorny issues about how it would approach these purchases without pushing down borrowing costs for only the highest-rated and richest counties and states.

House Speaker Nancy Pelosi, also a California Democrat, earlier this week said in a letter to colleagues that she “urged” Federal Reserve Chairman Jerome Powell to support state and local governments. Pelosi spoke with Powell for 25 minutes by phone this week.

Amanda Critchfield, a spokeswoman for Senate Banking Committee Chairman Mike Crapo, declined to comment on the prospects for Waters’ proposals in the Senate. Senators are considering measures to press the Fed to help workers, in addition to banks, according to a person familiar with the discussions.

The Bond Dealers of America, a lobbying group that represents banks and dealers, has also sought help from Powell. On Wednesday it asked the Fed to include non-primary dealers of muni securities in its emergency lending program.

The lobbying group said would help the retail-focused dealers in the municipal market, which is dominated by mom and pop investors.

“The municipal market, like all sectors of the capital markets, has been hit hard by the economic uncertainty associated with the coronavirus pandemic,” the letter said. “Liquidity has waned significantly as measured by bid-ask spreads and price volatility has been perhaps the most severe ever in the history of the market.”

The lobbying group also asked for the Fed’s commercial paper funding facility to include variable-rate municipal debt, a market niche that has been roiled by investors selling the securities in favor of cash.

States and localities are struggling to maintain basic services as the virus spreads -- from police and fire, to garbage disposal and health care systems that are handling a surge of infected patients.

Earlier this week, a group representing the nation’s mayors requested $250 billion to help cushion the blow to cities stung by the disappearance of tourism, layoffs and the shutdown of schools.

In a sign of how market turmoil hits first responders directly, Methodist Le Bonheur Healthcare, a hospital system in Memphis, Tennessee, on Wednesday saw interest on $124 million of its variable rate bonds more than double to 5%, threatening to add $4 million a year to annual debt payments.

The Fed has the authority to buy short-term municipal debt, though Barkin said he hasn’t yet seen that market freeze up in a way similar to commercial paper.