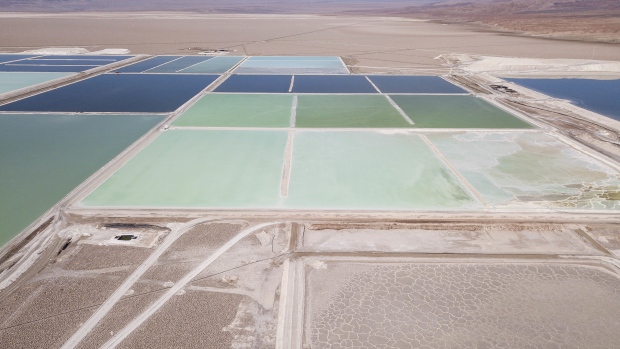 Brine pools at the Albemarle Corp. Lithium mine in Calama, Antofagasta region, Chile, on Tuesday, July 20, 2021. Albemarle Corp., the world's biggest producer of lithium, is fast-tracking advanced forms of the metal that could result in better batteries for electric vehicles. Photographer: Cristobal Olivares/Bloomberg , Bloomberg

(Bloomberg) -- Albemarle Corp., the world’s largest producer of lithium, raised its outlook for the second time this month as tight supply and growing electric-vehicle demand forces battery makers to pay up for the metal.

The Charlotte, North Carolina-based miner now expects sales from $5.8 billion to $6.2 billion this year, up from its previous estimate of $5.2 billion to $5.6 billion. to boosted profit forecasts for the year due to “additional index-referenced, variable-price contracts for battery grade lithium sales,” it said in a statement. Shares jumped as much as 5.3% in trading after normal exchange hours.

Demand for electric vehicles — and the batteries that power them -- has driven prices for key metals higher, even sparking fears of shortages of materials like lithium, cobalt and nickel. Lithium supplies are a concern in particular because there’s no substitute for it in electric vehicle batteries. A gauge of lithium prices more than doubled in the first four months of this year after surging 280% last year.

The company last increased its guidance on May 4 when it released first-quarter earnings. Overall, the midpoint of Albemarle’s 2022 sales estimate is 38% higher than just a few weeks ago.