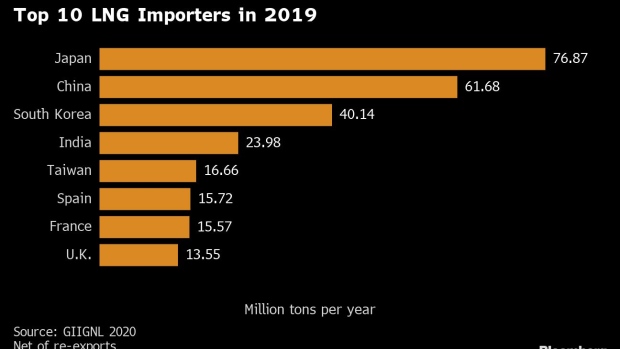 (Bloomberg) -- One of the world’s biggest liquefied natural gas buyers has become the latest company to ask suppliers to defer shipments as the impact of the coronavirus outbreak cripples energy demand.

Korea Gas Corp., or Kogas, called on some of its suppliers on term contracts to defer some immediate cargoes due to high inventories and consumption restraints caused by the virus, according to people with direct knowledge of the matter.

The South Korean company’s move follows firms in India and China that requested cancellations and delays due to the pandemic. To make matters worse for suppliers, they are being forced to find new buyers at a time when spot prices are languishing at record lows.

Several buyers in North Asia, the global demand center, have already exercised so-called “downward quantity tolerance” clauses in their long-term contracts, which allow them to take up to 10% less volume than originally agreed.

South Korea is the world’s third-biggest buyer of LNG and Kogas has a range of supply contracts with providers around the world, including Qatar and Russia. It wasn’t clear what other suppliers may have been approached by Kogas for rescheduling cargoes.

Kogas buys 2 million tons a year from Total’s portfolio under a contract that runs through 2031, according to data from the global importers group GIIGNL. A 20-year Malaysian LNG contract is also for 2 million tons annually until 2028.