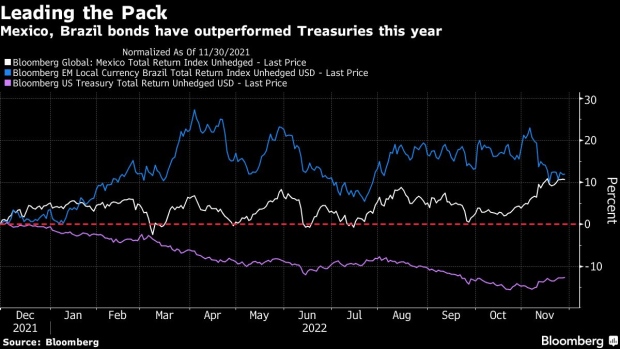 (Bloomberg) -- Mark Nash, who had been bearish on bonds including Treasuries and credit, says there’s value in emerging-market sovereign debt.

“We shorted everything,” said Nash, who oversees the Jupiter Strategic Absolute Return Bond Fund which beat 96% of its peers this year. But “we do like local emerging-market bonds unhedged.”

Nash favors securities sold by Brazil, Indonesia and Mexico -- some of the best-performing sovereign debt this year as they benefited from a commodities boom, early rate hikes and receding fears of a hawkish Federal Reserve. He thinks they’ve only got more to gain with inflation relatively under control, while positive real yields add to their appeal.

The bet is paying off for the fund, which gained 5.7% this year amid a record annual rout in US government bonds. Brazil’s debt has risen 11% in 2022, while Mexican notes have climbed 5.4%. In contrast, Treasury investors suffered a 12.4% loss.

Nash’s wagers may show that there remains pockets of opportunity in the fixed-income space, after a year in which rising interest rates and surging inflation inflicted painful losses on investors. Signs that the Federal Reserve could slow its pace of tightening are helping to revive appetite for bonds.

“We are moving into a different world in which commodity prices and resources are expensive -- the scarce asset now is energy, it is commodities,” said Nash, who helps oversee $1.5 billion at Jupiter Asset Management. Some emerging markets “have high real yields, they have better trade balances and they generally have better fiscal coffers.”

The fund recorded a 650% turnover in securities traded this year and also “cleared out” a large chunk of shorts across developed-market sovereign debt amid the recent global bond rally, said the London-based money manager. It still maintains some bearish exposure to Treasuries, gilts and Japanese government bonds.

Here are edited comments from a Q&A with Nash:

We are short dollars now, making the switch four weeks ago. I do think over time the dollar does fall. Fund has long positions in the Australian dollar, Brazilian real, Indonesian rupiah and Canadian dollar.

Eventually what will happen is inflation will fall globally, and it’ll fall for emerging markets a lot. Those central banks can actually start to ease policy to support growth, whereas in the West, policy will be kept tight to keep growth down. That difference will support emerging-market fundamentals.

--With assistance from Masaki Kondo.