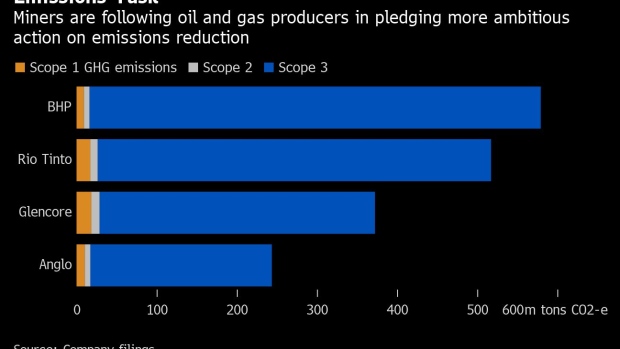 (Bloomberg) -- BHP Group, a major industrial polluter, says it will benefit most from a global shift toward faster and more dramatic measures to address climate change, and aims to profit from doing so itself.The top miner, which plans to reduce emissions attached to its own operations, will drive the innovation needed to do so by expecting investments in climate change action to be profitable, said Chief Executive Officer Mike Henry. Moreover, an aggressive global shift to renewable energy and electric vehicles will boost demand for materials that the company produces, he said.

BHP is “not easing up on the pressure to both achieve our emissions reductions ambitions and to generate value,” Chief Executive Officer Mike Henry, promoted to the post in January, said in an interview.

The firm, which has a higher annual carbon footprint than its home nation Australia, has said that it will lower greenhouse gas emissions from its own operations -- a small fraction of the total -- by almost a third by 2030 and to zero by 2050. It’s also promised to help customers curb pollution caused by the use of its products like coal and iron ore, but has faced criticism for not setting targets for absolute cuts to emissions in its supply chain.

Ambitious plans to limit temperatures rising 1.5 degrees Celsius would significantly boost demand for copper and nickel, needed for renewable energy and electric vehicles, and potash, a crop nutrient -- three prospective growth areas for the miner. The scenario would also support requirements for higher-quality raw materials for steel-making, according to BHP’s analysis.

“In many ways, it challenges the orthodoxy of a lot of companies: that a slow and gradual, drawn-out transition is better,” said Emma Herd, CEO of the Investor Group on Climate Change, which includes institutions controlling about A$2 trillion ($1.5 trillion) in investments. “They’ve actually found that a rapid decarbonization delivers more shareholder value.”

Investors have a clear incentive to keep pressuring the giant miner to not only accelerate its own efforts to curb emissions, but to use its influence to advocate for government policies that would help support a better climate outcome, she said.

Key polluters, including miners and oil producers, are under increasing pressure from major investors to take more ambitious measures to curb emissions, while also continuing to generate profits. Climate Action 100+, a group of investment firms that manage over $47 trillion in assets, said Monday it would push 161 companies -- including BHP -- to commit to net zero strategies by 2050.

BHP, with mines in places from Australia’s Outback to Chile’s Atacama desert, will potentially spend between $2 billion and $4 billion over the next decade to support its climate initiatives, including on projects to replace diesel-fueled trucks, to switch operations to renewable energy, and to accelerate development of carbon capture and storage technology.

Setting an expectation that the bulk of those investments should be profitable “increases the likelihood that we’ll be able to create value more often than not, and will actually give rise to an acceleration of some of the technical solutions,” Henry said.

The miner’s plans have been questioned for focusing too much on the development and deployment of new technology, particularly carbon capture, which has struggled to be economical because the price of carbon in most countries is too low.

BHP has also faced criticism for not setting targets for specific, absolute reductions in Scope 3 emissions -- mainly those generated by a customer’s use of a company’s products. They account for about 97% of BHP’s total carbon output, according to Market Forces, an environmental campaign group.

“Attention should be going into where BHP’s climate risk is largest,” the campaign group’s executive director Julien Vincent said. “It has to be tackled head on.”

The firm’s approach contrasts with Royal Dutch Shell Plc, which has indicated it could restrict sales to some customers unable to reduce their emissions, and to BP Plc which will cut oil production by 40% by 2030. Glencore Plc has forecast a 30% decrease in its Scope 3 total over the next 15 years as coal output falls from depleting mines in Colombia and South Africa.

“Trying to do it through force, either by us reducing production, or us saying we won’t sell to certain customers, I don’t believe will have any impact on global emissions,” BHP’s Henry said in the Friday interview. “The way to have impact is through collaboration with customers and solving the technical solutions.”

Past examples in the maritime sector, including the development of Wozmax vessels -- tailored specifically for the size of Western Australia’s ports -- and the RightShip standards initiative to improve safety and sustainability with Rio Tinto Group and Cargill Inc., show BHP can corral customers, competitors and suppliers into collective action, Henry said.

To encourage steelmakers who use its iron ore and coking coal to lower emissions intensity by 30% by 2030, BHP will help to devise alternative production methods. It’ll also seek to stimulate development of lower-emission bulk vessels to aid the shipping industry to achieve a similar 40% reduction.