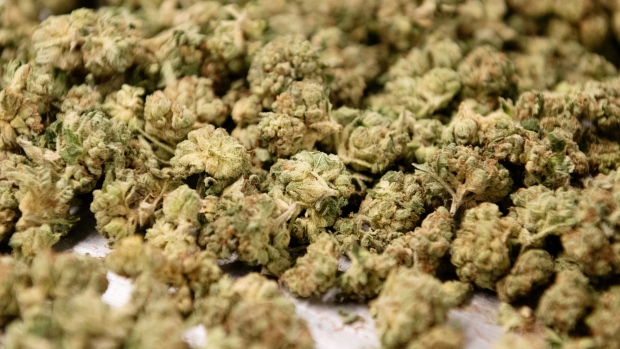 Finished buds sit in a tray at the CannTrust Holdings Inc. cannabis production facility in Fenwick, Ontario, Canada, on Monday, Oct. 15, 2018. Canada, which has allowed medical marijuana for almost two decades, legalizes the drug for recreational use on Oct. 17, joining Uruguay as one of two countries without restrictions on pot and putting the country at the forefront of what could be a $150 billion-plus global market when others follow. , Bloomberg

(Bloomberg) -- New Jersey’s effort to legalize recreational marijuana is dead for this year, a top state lawmaker said, signaling a setback in Governor Phil Murphy’s effort to join the growing national movement to end the prohibition on the drug.

“The votes aren’t there,” Senate President Steve Sweeney, a Democrat, told reporters on Wednesday. He predicted that it will happen in 2020 at the ballot box.

New Jersey earlier this year appeared poised to become the next state to legalize adult use, given the support from Murphy, fellow Democrats who lead the legislature and the public, only to see the effort founder in face of opposition from some lawmakers worried it would encourage drug use and increase crime.

While the West Coast has created a booming adult-use market, eastern seaboard states have been slow to catch up. A legalization push in New York also faltered this year despite the support of Governor Andrew Cuomo.

To contact the editors responsible for this story: Flynn McRoberts at fmcroberts1@bloomberg.net, William Selway, Michael B. Marois