The latest smash hit from the Korean entertainment world “Squid Game” is also proving popular with investors, who have been snapping up shares of at least two companies related to the thriller series.

A dramatized survival game in the vein of “Hunger Games,” the show currently tops the global rankings on Netflix Inc., and is the first Korean drama to claim the No. 1 spot in the U.S. on the service, according to streaming ratings firm FlixPatrol.

Bucket Studio Co., which holds a stake in the agency representing Squid Game’s lead actor Lee Jung-Jae, has surged about 90 per cent in the three trading sessions through Monday. Showbox Corp. -- whose predecessor had invested in Siren Pictures, the show’s privately owned production company -- has jumped more than 50 per cent.

Bucket Studio is only an indirect beneficiary of “Squid Game,” and Showbox’s connection is also uncertain since Siren Pictures is 100 per cent owned by its CEO Kim Ji-Yeon, according to a note by analyst Douglas Kim on Smartkarma. Still, Korean movie and TV production stocks could outperform over the next 2-3 years on global demand for the nation’s entertainment content, he said. 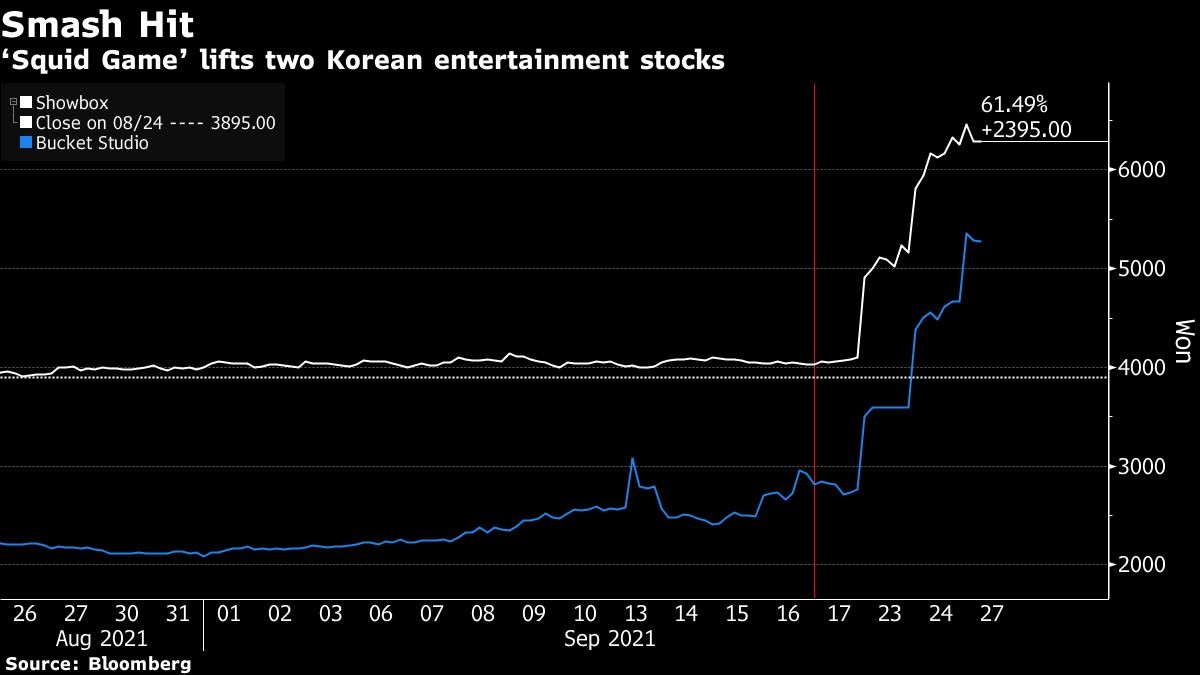 “Squid Game” depicts a group of people with huge debts taking part in a series of deadly games to win prize money. Its depiction of the battle between the haves and have-nots has also drawn comparisons with Oscar-winning black comedy “Parasite,” which helped drive gains in shares of its producer CJ ENM Co. last year.

CJ ENM rose Monday along with Showbox, Bucket Studio and others such as Studio Dragon Co., whose “Hometown Cha-Cha-Cha” series ranked No. 7 on Netflix worldwide, according to FlixPatrol.

Korean companies can produce “highly popular dramas and movies that could pose a serious competitive threat to the Hollywood powerhouses,” Kim said. “‘Squid Game’ is a very good example of this,” he said.