Venezuela’s dwindling oil exports were dealt another blow as one of India’s top refiners secured millions of barrels of Canadian crude on concern that the U.S. is poised to step up sanctions against Caracas.

Reliance Industries Ltd, owner of the world’s largest refining complex, signed a deal to purchase 2 million barrels of heavy Canadian oil a month for the next six months, according to people familiar with the situation, who spoke on condition of anonymity. Venezuela has been the third-largest supplier of crude to Reliance so far this year, according to data compiled by Bloomberg.

While U.S. sanctions have all but crippled Venezuela’s oil export trade, so-called crude-for-diesel swaps between national oil company Petroleos de Venezuela SA and Asian and European refiners were permitted for humanitarian reasons. The Trump administration was reported last month to be considering additional measures to cut off these remaining fuel transactions. Reliance’s decision to buy Canadian crude in these volumes may be a sign that it doesn’t expect the status quo to last much longer.

The Trump administration is zeroing in on the diesel swaps because it’s running out of options to pressure the regime of President Nicolas Maduro, according to Scott Modell, managing director of Rapidan Energy Group. “The White House would like to galvanize the Venezuelan street and undermine the legislative elections on December 6,” he said.

Venezuela accounted for 14 per cent of the oil processed at the Jamnagar refining complex this year. Reliance lifted 11.6 million barrels from Venezuela this month, double the volumes seen in August and the most since March 2016.

U.S. special envoy to Venezuela and Iran Elliott Abrams said recently that sanctions on Venezuela convinced Russia and China not to sell gasoline to Caracas and alluded to possible “snap back” sanctions in the coming days. A spokesman for the Treasury Department, which enforces international sanctions through the Office of Foreign Assets Control, declined to comment.

Ending these swaps could worsen an ongoing humanitarian crisis by cutting off fuel used for power generation and by the agricultural sector. Spontaneous protests have broken out in recent weeks over demands for fuel, cooking gas and basic services, according to the local NGO Venezuelan Social Conflict Observatory.

--With assistance from Debjit Chakraborty, Fabiola Zerpa and Ben Bartenstein. 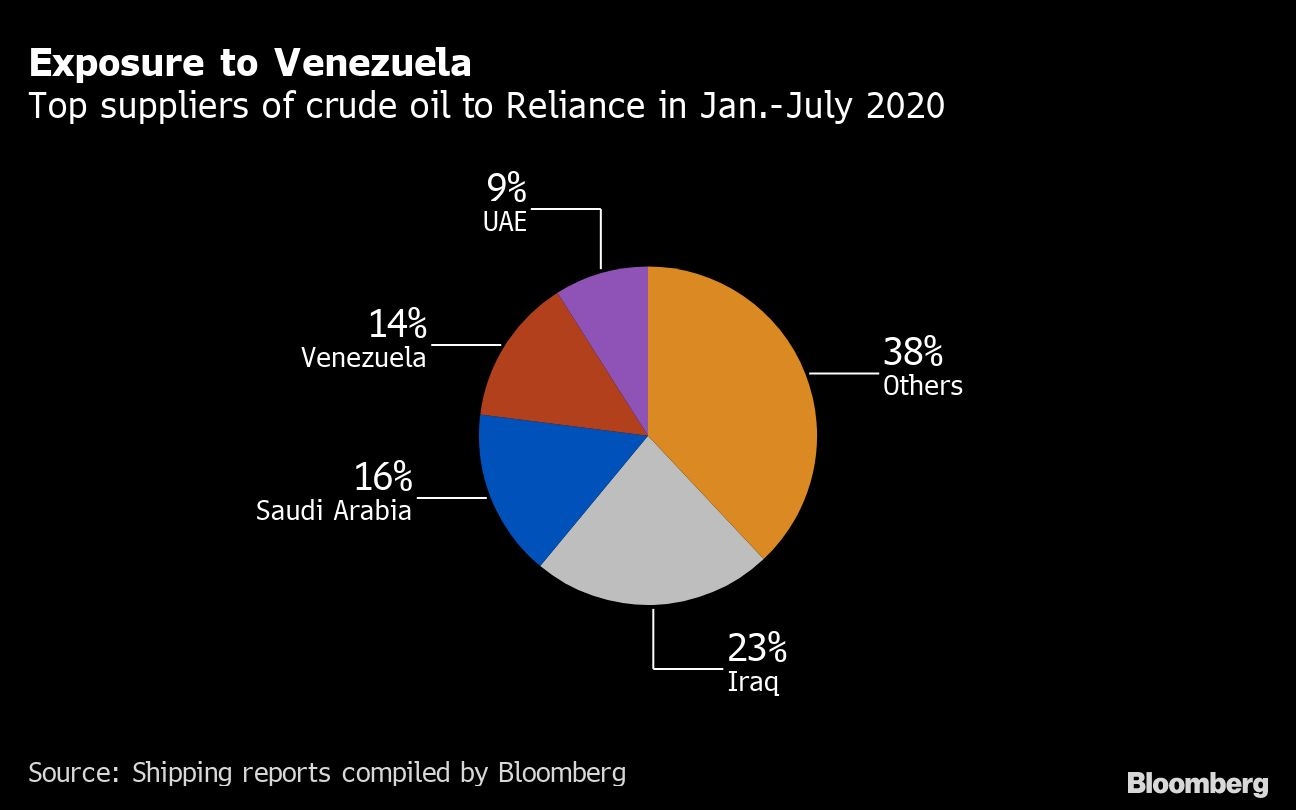