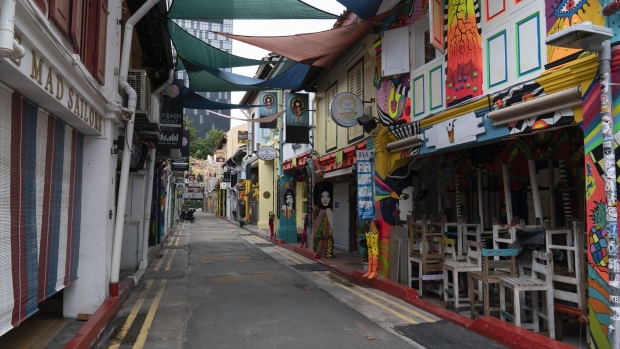 Stores and bars stand closed on Haji Lane during a partial lockdown imposed due to the coronavirus in Singapore on Tuesday, April 7, 2020. Singapore defended its decision not to close its schools earlier as the Southeast Asian country goes into a partial lockdown from today to stem the spread of the coronavirus. Photographer: Bloomberg/Bloomberg , Photographer: Bloomberg/Bloomberg

It’s not often a top bureaucrat in Singapore publicly discloses personal vulnerabilities, but the coronavirus pandemic is upending what is seldom discussed outside close circles.

Chng Kai Fong, managing director of the island’s Economic Development Board and a former top aide to Prime Minister Lee Hsien Loong, opened up about his mental health struggle during the pandemic at a technology conference held virtually on Sunday.

Chng began his online panel at the She Loves Tech conference by describing 2020 as “an unprecedented year in terms of personal crisis.” In April, he lost his brother-in-law to cancer, while a close family member is going through serious mental health issues, he said. He described his emotional and mental state as one he’d never experienced in over 40 years of life.

“There was this feeling of heat and anger starting with palms and then sort of moves towards your entire body,” Chng said. “There was one day when I couldn’t even wake up; I had to really drag myself out at 11:30 and go for a run because I knew these were signs of depressive bouts. Even during the run, I was super breathless. It was a bad sign.”

He is not alone. More employees in Asia are reporting high stress levels since the start of the pandemic, according to a Mercer survey published last month. It said the percentage of senior management who reported experiencing high levels of stress jumped from 9% to 33%.

Chng is part of the leadership team in the Singapore agency charged with promoting growth and positioning the city-state as a global center for business. The EDB pulled in S$15.2 billion ($11.3 billion) in investment commitments from overseas companies such as Micron Technology Inc. in 2019. He was principal private secretary to the prime minister for three years.

Chng said he’s not out of the woods yet, but decided to openly share his experience with others who might be facing mounting pressure to lead during times of fear and uncertainty.

One thing that helped him cope is to “acknowledge that it’s OK not to be OK,” he said. Another is to pro-actively seek help.

“In a normal work situation, everyone puts on their game face, everyone puts on a jacket,” he said. “But Zoom gives you a window, that intersection between personal and business,” showing kids and pets in the background, he added.

“We can do a lot more as leaders to acknowledge that and to share a little bit more about ourselves,” Chng said. “And that builds trust.”