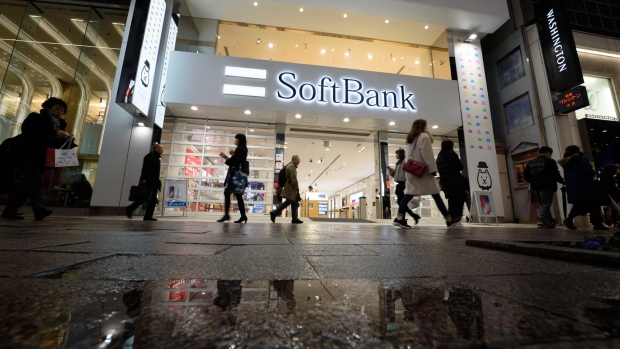 Pedestrians walk past a SoftBank Group Corp. store in Tokyo, Japan, on Thursday, Feb. 22, 2018. Billionaire founder Masayoshi Son said this month that the company will start preparing for the mobile IPO and aims for a listing within a year. It could still end up scrapping the plan, the company said on Feb. 7. , Bloomberg

(Bloomberg) -- SoftBank’s week went from bad to worse, after public investors and California lawmakers separately turned down the lights on some of the firm’s shiniest startups.

First, SoftBank urged WeWork to shelve an initial public offering after investors recoiled. If WeWork acquiesces, the move would staunch an important source of capital to one of SoftBank’s biggest bets. Then on Tuesday night, the California Legislature passed a labor bill that could force gig economy companies to incur substantial new employment costs and dramatically reshape their business models.

SoftBank has put more than $10 billion into WeWork and is a key financier of businesses in the gig economy. It’s the biggest investor in Uber Technologies Inc. and also holds large stakes in food delivery startup DoorDash Inc. and dog-walking app Wag Inc., all of which are built on contract labor.

This week’s events didn’t have a substantial impact on shares of SoftBank Group Corp. or Uber, but the implications will play out over the coming months and years. For WeWork, the company must decide whether to get its now-diminished IPO back on track with a possible overhaul of its corporate governance or to seek capital elsewhere. Meanwhile, Uber and DoorDash are teaming up to fight California lawmakers with a war chest of $60 million between the two of them and a proposal to put an alternative referendum before voters on next year’s ballot.

SoftBank and its three-year-old Vision Fund have a lot riding on the gig economy. It led a $535 million round in DoorDash and kicked $300 million into Wag last year, investments designed to legitimize the business model Uber helped pioneer. Uber is the largest of the lot and as such, has the most to lose. Analysts expect additional costs would top as much as $500 million a year to cover overtime pay and other entitlements for California drivers. If other states follow California’s lead, that number could quickly increase.

Tony West, Uber’s chief legal officer, said the company expects to “continue to respond to claims of misclassification in arbitration and in court as necessary, just as we do now.” The new law says people whose jobs are in the usual course of a company’s business must be considered employees. West contends that drivers aren’t in the usual course of Uber’s business because it’s a technology platform. Uber has warned shareholders in securities filings that a reclassification of workers would adversely affect its business.

SoftBank will need to weigh all of these issues when it reports an estimated value for the Vision Fund to investors for the quarter, which ends this month. SoftBank marked up the fund’s total value by $9.9 billion to $82.2 billion in the last reporting period ending in June. It may be difficult to justify continued paper gains.

The WeWork IPO and gig economy law are two points of uncertainty at a time when SoftBank needs to show stability. The Japanese conglomerate unveiled plans this summer to raise a second, larger Vision Fund to bankroll technology companies.

The goal is to amass $108 billion. Some $38 billion will come from SoftBank, and as much as $20 billion will arrive in the form of loans from SoftBank to employees taking stakes in the fund. That still leaves $50 billion from outsiders, who need to be convinced that SoftBank is a reliable steward of their money.

To contact the reporter on this story: Lizette Chapman in San Francisco at lchapman19@bloomberg.net

To contact the editors responsible for this story: Mark Milian at mmilian@bloomberg.net, Edwin Chan