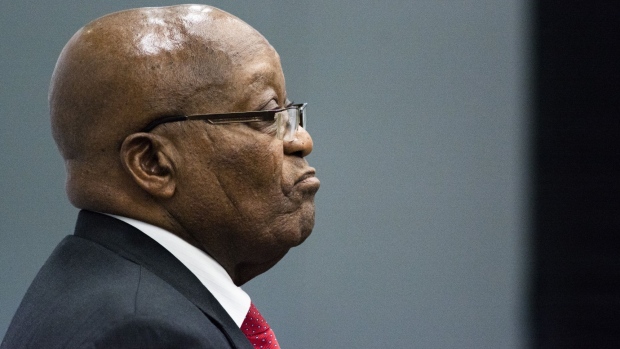 Jacob Zuma, former South African president, pauses following a recess break in the state capture inquiry in Johannesburg, South Africa on Monday, July 15, 2019. Zuma is set to appear before a judicial panel for the first time today to answer accusations that he consented to and benefited from widespread looting during his nine-year rule. Photographer: Waldo Swiegers/Bloomberg , Bloomberg

South Africa’s top court rejected an application by former President Jacob Zuma to review his conviction and 15-month sentence for violating its order to testify before a judicial panel that’s probing graft during his tenure.

Zuma “has not met the statutory requirements for a recission,” Constitutional Court Judge Sisi Khampepe said in a judgment handed down in Johannesburg on Friday.

Zuma, 79, was taken into custody on July 7, but prison authorities released him on medical parole less than two months later -- a decision the main opposition Democratic Alliance is contesting in court. His incarceration triggered protests in two provinces that left 354 people dead and resulted in the looting and destruction of thousands of businesses.

A former intelligence operative, Zuma remains a powerful political player in South Africa and his case has been a key test for the government’s resolve to uphold the rule of law. He led the country for almost nine scandal-marred years until the ruling party forced him to quit in 2018 to stem a loss of support.

President Cyril Ramaphosa estimates that more than 500 billion rand ($35 billion) was stolen from state coffers during his predecessor’s rule. Zuma, who is also facing trial on charges of taking bribes from arms dealers in the 1990s, denies wrongdoing.