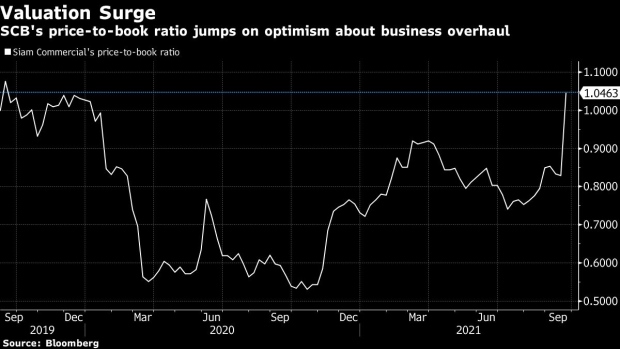 There will be no job losses at the banking operations, Chief Executive Officer Arthid Nanthawithaya said in Bloomberg Television interview on Monday. Siam Commercial will focus on profitability, fintech investments and other growth opportunities in the overhaul, he said.

Siam Commercial is ramping up investments in technology and services as traditional lenders across Southeast Asia try to fend off competition from new online finance rivals such as Ant Group Co. The Bangkok-based bank will establish a new company, called SCB X, to be listed on the city’s stock exchange in a move designed to boost flexibility and manage risks.

“The bank is too big to change the culture and to move to be a tech company,” said Arthid. “The size of the bank will be more or less” unchanged, he said.

The stock fell as much as 2.7% on Monday after resuming trade from a public holiday. Siam Commercial’s shares jumped 19% on Sept. 23, a day after announcing the restructuring.

An aggressive digital-lending push could further bolster earnings at Siam Commercial over the next 3 to 5 years, according to Rena Kwok, an analyst at Bloomberg Intelligence.